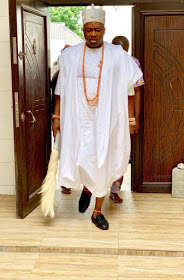 Life is indeed unfair. It definitely has been unfair to Oba Saheed Elegushi.

How can one explain a man losing what he so cherish and has wanted all his life?

This is the poser crisscrossing the mind of the young and handsome monarch, Oba Elegushi, the 21st Elegushi of the Ikate-Elegushi.

Barely a year and seven months after welcoming an heir with his second wife, Olori Hadiza Elegushi, nee Tanko, the monarch has been thrown into mourning.

This follows the death of his one and only son, and heir apparent to the Kusenla throne.

Though the circumstances that led to the death of the prince is yet unknown, it definitely has set the bubbly monarch back, even as he mourns his departed.

Mallam Mele Kyari: Not Invincible After All