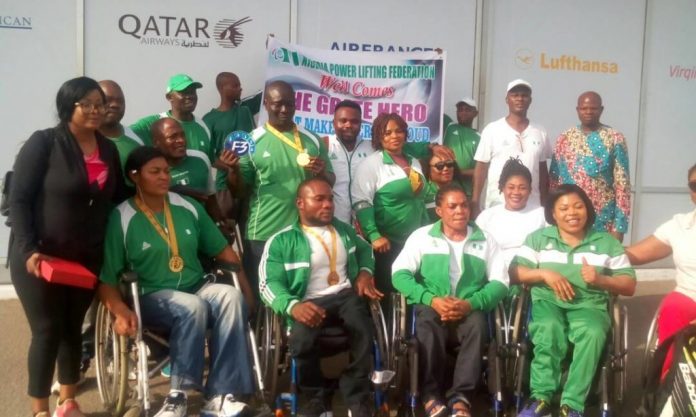 The Nigeria Para-powerlifting Federation (NPPF), is set to unveil its Logo and Mascot for the 2019 World Para Powerlifting Championship.
Queen Uboh, the President of the federation told newsmen in Lagos on Tuesday, October 29.
According to Uboh, “the federation is prepared and ready for the unveiling billed to take place on Thursday, November, 1 at Oriental hotel and suite, Lagos.
“This is in preparation towards the 2019 World Para Powerlifting Championship which we won the right to host come January 2019, we are ready for the unveiling of the logo and mascot”.
“We employ lovers of the game to come and support this and together we can put smile on the faces of this disabled athletes who have found ability in disability,” Queen Uboh said
The president commended the efforts of Peak Milk for providing a world class facility in Lagos for the para-power athletes to train, and appealed to other corporate organisations and state governments to support NPPF.
She called on the sport ministry, state government and corporate organisation to contribute and uplift the game of powerlifting and also think of a better welfare package for the athletes after retirement.
She revealed that her priority was to make sure when these athletes are no longer active, they have something to fall back to and call their own.
It would be recalled that the six athletes that represented the country in the powerlifting events of the Commonwealth Games in Gold Coast, Australia, each clinched a medal, returning with a total of six medals.
Also, Esther Oyema set a new world record after securing a lift of 131kg.
Uboh added: “Most stakeholders in the country do not really care and think about this disable athletes who even with their condition continue to make this nation proud anytime they have the opportunity to represent their father land.
“In the last Olympic games in Australia they made sure the nation anthem was heard, even where the able bodied athletes couldn’t succeed.
“We went with only six athletes to Gold Coast and each of them came back with a medal. If we had presented more than six athletes we would have won more medals.
“So, the athletes are ready for the tournament come January 2019,” she added.
Post Views: 1,041

Join Style Director, Nikki Ogunnaike as she discusses “Diversity in Fashion” during her Masterclass at the 2018 GTBank Fashion Weekend