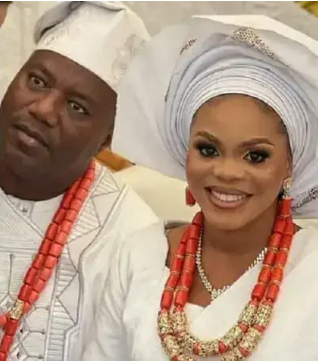 Socialite, Lanre Gentry, has finally said farewell to his union with his ex-wife, Mercy Aigbe.

Gentry got married to a young lady identified as Oluwabusayo on Saturday, September 11, seven years after parting ways with Aigbe.

Speaking on his new marriage, he said that there is no big deal getting married again after being without a wife.

He said, “If a wife leaves one’s house for seven years, does the husband not deserve to marry another wife? My happiness is the most important thing. I love my wife and I’m very happy with the woman in my life now without creating unnecessary drama. I am a Yoruba man and I don’t see any big deal in getting married again. I am not holding grudges against anyone. I love all my children and I like their mothers.

“Michelle (step-daughter) is my daughter and she’ll always remain so. I’m even still expecting more children because I’m still young.”

On finalising his divorce with Aigbe, he said, “I don’t have anything to say about that. When a woman leaves one’s house for about seven years, that is automatic divorce from the person (as far as I’m concerned). I am a businessman, so I don’t like drama.”

Gentry also debunked the reports that he had sold his hotel for N10m. He said, “How can I sell a hotel for N10m? I don’t need to respond to every report out there because I didn’t borrow money from anyone to start my business. A land in the vicinity of that hotel is sold for over N100m, so how could I sell my hotel for N10m? That is incredulous.”

I Was Once Told I Had Spiritual Problem-Mr Macaroni