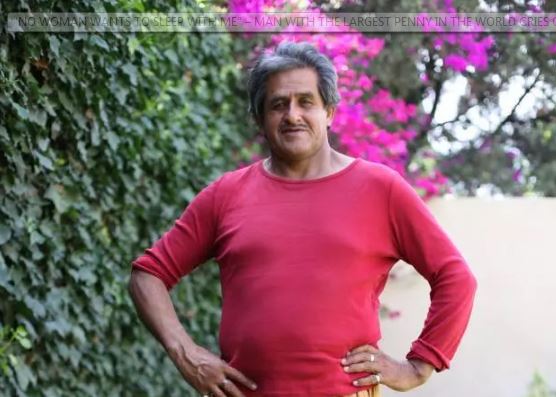 54-year-old Roberto Esquivel Cabrera has been tagged the man with the largest manhood in the world.

The SunUK reports that the Mexican’s manhood measures 18.9inches. And sadly, this has not helped Roberto as he recently revealed that his ‘instrument’ does not allow him get a good job. He instead relies on food banks for sustenance.

However, Roberto is not ready for reduction as he is obviously interested in the fame that his size brings. Before now, American actor Jonah Falcon had the known largest penis in the world, measuring 9.5 inches flaccid, and 13.5 inches when erect. But Roberto hijacked the title from and became known with his larger manhood size in 2015 after he was filmed weighing his penis to prove its authenticity.

“I am famous because I have the biggest p*nis in the world. I am happy with it, I know nobody has the size I have. I would like to be in the Guinness Book of Records but they don’t recognise this record.”

But despite his pride, members of the medical community have urged him to at least consider a penile reduction. Doctor Jesus David Salazar Gonzalez said:

“We have advised him ‘Mr Roberto, the best thing for you is that the doctors give a normal shape to your p*nis so that it doesn’t hurt you, in order to have s*xual relationships, in order to have children.’ But he doesn’t accept it, he’d rather have a penis bigger than the rest of the people.

“In Latin culture whoever has the bigger penis is more macho. It’s something that makes him different to the rest of the people and makes him feels special. He was obsessed with the p*nis length.

“He began with this enlargement since he was a teenager, wrapping some bands around his penis with some weights and trying to stretch it.”

The length of Roberto’s manhood has however made him suffer some health problems. Frequent urinary tract infections because not all his urine escapes his lengthy foreskin and even while asleep, his gargantuan manhood is an issue because he is unable to sleep chest down and has to put it on its own pillow to escape discomfort during the night. He also does not have an active s*x life as his manhood is too big to have intercourse. He said:

“Some people ask me if I put some condoms on it and the answer is: I cannot. I can never penetrate anyone because it is too thick.”

While living in the USA, Roberto did attempt to have s*x twice, but the first woman backed out as soon as she saw his penis and the other one had to stop because it was too painful. He said:

“I cannot wear a uniform like anybody in the companies and also I cannot get on my knees. I cannot run fast and so the companies think badly of me. They say that they will call me, but they never do.”

Roberto said the government has recognised him as disabled after initially dismissing his claim. He said:

“Every four months they give me some economic assistance but it is not enough. I visit the food banks everyday to take my meals at 12 ‘o clock.”

An adult entertainment company offered to pay for a reduction, but Roberto refused and says his goal is to to meet the right woman – and possibly launch himself as a p*rn star.

“I am happy with my penis and I wish to go back to the USA and spend the rest of my life over there. I don’t feel sad because I know in the USA there is a lot of women. One of them will be the right size for me.

“I would like to be a p*rn star and I think I would make a lot of money over there. And the people are not like over here, they are more liberal: they don’t care about what I have in my pants.”

Much Ado About Jim Obazee’s Move

Chris Okafor Is Standing Against All Odds