The Nigerian Army has denied knowing the men in a viral video which shows soldiers in camouflage attire chopping off the leg of a civilian.

In a statement released by the army, it condemned the video, adding that the punishment netted out on the man in the video was not in accordance with the training and codes of the Nigerian Army.

The statement signeds by Colonel Sagir Musa, the Acting Director Army Public Relations also stated that the dressing of the men in the video and the camouflage they were wearing wasn’t in conformity with that of the Nigerian Army. According to Colonel Sagir, these conclusions were reached after careful study of the video and further investigation.

The controversial video in which a soldier was seen breaking the leg of a man and attempting to force him to eat his flesh has been making the rounds on social media. 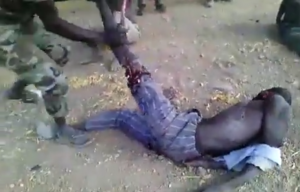 The Nigerian Army (NA) has observed with dismay a video clip circulating on some social media platforms showing some persons in camouflage uniform mercilessly disfiguring a leg of a fellow human being, with some others shabbily, carelessly and variously dressed. Some are wearing bathroom slippers.

The NA wishes to emphatically state that having thoroughly examined the video and investigated further, it has reached the factual conclusion that all the characters involved in the despicable act are not personnel of the NA.

The action of the characters in the video clip particularly the act of meting out cruel punishment, talk less of decapitating a part of a fellow human being is not licensed, encouraged or condoned by the NA and is entirely against NA’s training, Code of Conduct (COC), Rules of Engagement (ROE) and Standard Operating Procedures (SOP) in or out of conflict situations.

Instructively, the camouflage used by the characters in the video is not the type been used in the NA and does not in any way conform to the dress code of the NA.

Similarly, NA troops are not allowed to wear bathroom slippers and civil outfits during operations.

NA troops fighting insurgency in Nigeria, have severally captured many terrorists, took custody of many surrendered terrorists some of whom have been prosecuted, while those that voluntarily surrendered are undergoing de-radicalization and rehabilitation under the Federal Government programme codenamed Operation SAFE CORRIDOR.

NA wishes to once again remind members of the public that not all photos and videos being circulated on social media and other outlets are truly members of the NA. NA has also severally and consistently made it clear that it monitors and will continue to monitor the actions of its personnel to ensure they are in conformity with extant laws and in line with International best practices.

Under the present leadership of the NA, sufficient efforts have been made to ensure personnel respect human rights in line with the ROE, COC and SOP. Any violation attracts appropriate punishment in accordance with the extant military justice system.

Members of the public are requested to note that the barbaric act (as shown in the video clip), has often been associated with the terrorists either as a punishment to one of their own or to send out powerful message to their followers and the larger public with the sole aim of instilling fear which is one of the major basis and aims of terrorists/terrorism.