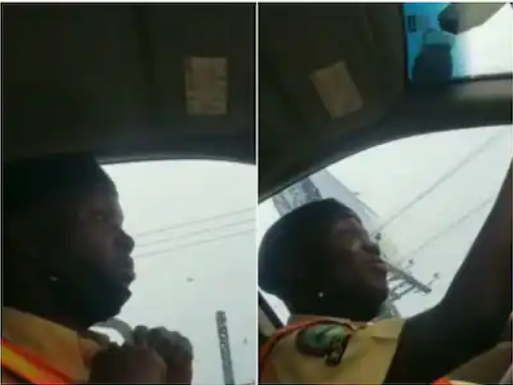 An officer of the Lagos State Traffic Management Authority (LASTMA) has been caught taking bribe from a motorist.

The officer was recorded on tape with the video posted on Instagram by @goldmynetv and reposted by Nigerian artiste and social media influencer Tunde Ednut.

According to the unidentified officer who was unaware that he was being recorded, he would settle for N10,000 and not drive the motorist’s  car to the office where he would pay a huge fine.

Driving the car to the office environment to make use of POS for the transaction, the officer said he was being magnanimous with the motorist because they are both Yoruba. He said he opted for POS because it is impossible for a LASTMA officer to use his account for such an illegal transaction.

According to him, LASTMA officers deal with Igbo and Hausa motorists by imposing a huge fine on them whenever they break the law. He also said he decided to be a LASTMA officer because there was no other job available for him. The officer also revealed that their bosses are aware of their illegality because they are the ones who usually give them targets to meet on a daily basis.