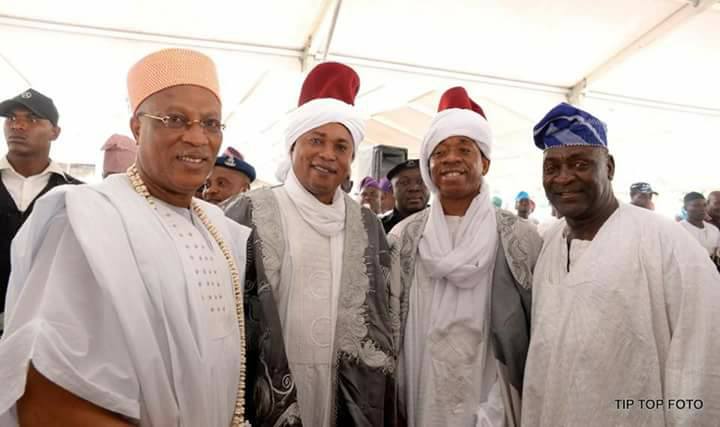 Following the death of the ninth Chief Imam, Alhaji Garuba Ibrahim on September 24, 2017. Sheikh (Engr.) Sulaiman Oluwatoyin Abou Nolla  has been turbaned as the new chief Imam.
Governor Akinwunmi Ambode who is being represented by the Commissioner for home affairs and culture Dr Abdul hakeem abdul lateef is to present the staff of office to the new Chief Imam who was appointed after the demise of the ninth Chief Imam, Alhaji Garuba Ibrahim on September 24, 2017.
Abou-Nollah, 43, assumed the throne in December 2017 making history as the youngest person and first graduate to occupy that exalted position.
Baba Adinni of Lagos State and Chairman of the Lagos Central Mosque, Sheikh Abdul Hafeez Abou who briefed newsmen on the ceremony and turbaning of new titled Chiefs of the Central Mosque, declared that the new Chief Imam is fit and competent for the position.
It would be recalled that the new Chief Imam emerged after a rigorous selection process which involved other aspirants for the position.
Baba Adinni said he was chosen among names forwarded by the Nolla family where he hails from because of his knowledge of Islamic jurisprudence.
“He was more or less the most outstanding among others. He is a choice of the Muslim Ummah. So he is no doubt competent and fit for the position. Not only that he is an Islamic scholar, he is also an engineer by profession”, he said.
Abou said the Sultan of Sokoto and President of the Nigeria Supreme Council for Islamic Affairs (NSCIA), Alhaji Muhammed Sa’ad Abubakar would be in attendance with other prominent Islamic and Christian leaders in the state and the country.
The elaborate turbaning ceremony was held on Sunday, 16 September, 2018 at TAFAWA BALEWA SQUARE (TBS) Lagos State and over 60 personalities are being turbanned today such Hon deputy speaker of LSHA Hon wasiu sanni eshilokun,Chairman LILG Hon Tijani adetoyese olusi, and Alhaji Mutiu Are,Alhaji Oyinlomo Danmole,Alhaja Modupeola Sanni aka Shine Shine CEO DUPE COSMETICS,Alhaja Khadijat Morayo Seriki CEO KADMOS TEXTILES
In his inaugural speech, the newly turbaned Chief Imam urged all Jam’ats across various mosques and Muslims in Lagos State community to embrace love, peace and unity to foster Islamic doctrine according to Allah’s command.
The chairman of the occasion, Alhaji  in his address said Alhaji Ariyo is the most suitable for the turbaning having operated in an acting capacity in Engineering or so, hence, the office is a familiar terrain to him. ‘Besides, he is qualified and competent spiritually, religiously… I wish him all the best’. Babs added.
However, the unified turbaning organizing committee chairman, Alhaji Naseer Ipaye described the ceremony as impressive and expressed gratitude to his committee members, guests, donors and all that contributed in one way or the other to make the ceremony a success.
Dignitaries and government functionaries at the ceremony include the chairman All Progressive Congress (APC) Lagos state Alhaji Balogun, Hon Jide Jimoh, Hon Omoworare, Cardinal James Odunbaku, Tayo Ayinde, Alhaji Waheed Usman Ogunbiyi, and others.
Post Views: 1,287

The 2018 GTBank Fashion Weekend set to hold in November