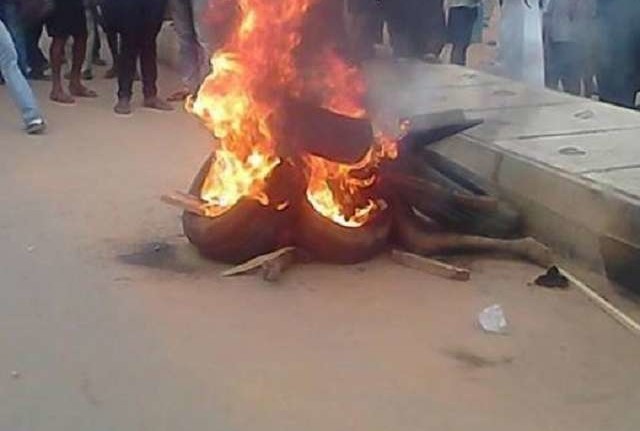 Life is the most precious gift that every living creature (both human and animal) cherishes most. This precious gift is guarded jealously against anything that tries to cut it short. When an animal sights a hunter in the forest, it takes to its heels and runs for safety. A sign that it does not want to lose its life. Without breath of life, the mortal body becomes a perishable vegetable and decays in few hours.

If one could treat others’ lives the same way he treats his, the world will definitely be a better place compared to what it is presently. If you could imagine yourself in place of that person going through that pain you put him into, you would pause for a while and have a rethink or a change of mind.

If we all can have this mindset, there will be less killings.

The life we talk about is inherent from birth. A gift which the Almighty God gives without asking for price in return. He freely gives to all to enjoy. No one has the right to take another’s life except Him (God).

Every blood spilled must be accounted for, let alone that of the innocent. They do not rest; they cry to their maker and fight back one way or the other.

In the bible, a woman was accused of the act of committing adultery. While she was about to be stoned to death, Jesus asked her captors, “He that is without sin among you, let him first cast a stone at her”, gradually, they all dropped their stones and let the woman go.

4 They say unto him, Master, this woman was taken in adultery, in the very act.

5 Now Moses in the law commanded us, that such should be stoned: but what sayest thou?

6 This they said, tempting him, that they might have to accuse him. But Jesus stooped down, and with his finger wrote on the ground, as though he heard them not.

7 So when they continued asking him, he lifted up himself, and said unto them, He that is without sin among you, let him first cast a stone at her.

This brings me to the issue about ‘jungle justice’

It is terrible to be in the hand(s) of those who delight in snuffing life out of fellow humans. They try everything possible to make sure that the breath is taking away before security agents could come for rescue in any case of alleged stealing. This is as a result of the belief that security agents could let the person off the hook if handed over to them, only for the suspect to continue in the alleged act. Even for the slightest offence that most definitely deserve pardon, you see some people resorting to jungle justice.

For instance, sometime ago, a video and pictures of a little boy who was lynched went viral. The report revealed that he was seven years old and was caught stealing garri. In that video, the little boy was seen being beaten to death and later set ablaze before onlookers. He cried for help, but the more he pleaded and cried for help, the harder his killers hit him, making sure that the life was taking away from him.

Though there could be no justification for stealing, the little boy I guess was hungry. He needed food but went for it the wrong way. It’s a crime to take what does not belong to you without the permission of the rightful owner. I agree that this lad violated this law. But still, his life should not have been taken from him as a result of this act.

On daily basis, young men and woman are killed for one minor crime or another. But one big question that keeps hitting my mind is if there are no innocent persons among these people that are killed.

This question arises as a result of the experience I had with my kinsman sometime ago in Owerri city of Imo State.

Thank God who neither sleeps nor slumbers. Thank God for Owerri citizens present that very day for not taking laws into their hands without investigation as it would have been a different case in some other states.

I and my kinsman woke up that day just like every other energetic young man out there. Full of our good dreams for life. My kinsman was a student of Alvan Ikoku College of Education at that time. His father who is now late, was hospitalized at the Federal Medical Centre, Owerri that period. On that fateful day, I inquired of the health condition of his father, he told me that he wanted to branch at the hospital to see his father before going for his lectures. So I decided to seize that opportunity to visit his father in the hospital, I promised to accompany him to the hospital.

We never had the premonition of any danger lurking, as we set out for the day. We had our breakfast, took our bath and got dressed and were ready to go. While we were on the streets, strolling down to the bus stop, we amused ourselves in our discussion until we finally got to the former FSP Park near the Cherubim junction where we stood with others waiting for a taxi that would convey us to Federal Medical Centre, Owerri where his father was admitted for treatment.

At the bus stop, I and my brother gave ourselves a little distance as we waited patiently for a taxi.

Suddenly, we saw some men approaching the bus stop in company of monkeys and Hyenas. The hyenas’ mouths were tied probably for them no to attack anybody.

Some people were excited watching the men perform with those animals and some others were scared and stayed out of the way for them to pass. We were watching the drama as much as we were also conscious of where we were going. There was no taxi plying towards our direction yet.

While we waited patiently, a tall dark man emerged and grabbed my kinsman at the collar of his belt and started accusing him of robbing him of sum huge amount of money at the bank a while ago.

My kinsman started laughing, it was unbelievable to him. He thought that the man was joking as part of the fun people were having there already. But the man showed all signs of seriousness to back up his claim that my kinsman accosted him at one of the other banks along that Wetheral Road after he made withdrawal and snatched a reasonable amount of money from him.

At this juncture, crowd gathered around my brother and the man. The attention that was on the men with monkey diverted to my brother and the man. I drew nearer and inquired from the man what he is talking about. I told him that he was joking because the young man he is accusing is my brother and that I came out from the same house with him. That we were on our way to see his father in the hospital. As I made this statement, the man tried to grab me as well but it seemed like a force or something I cannot explain stopped him.

He continued with his accusation that I and my kinsman were the ones that attacked him a while ago, robbed him of his monies and that we had given the money to our gang members who ran away with the monies before he caught up with us at that bus stop. Some seemed to believe him from the look on their faces and some others seemed not to believe the man.

At this point, the crowd had increased, but no one as he expected had raised hand or stone or anything against us. It was like a Nollywood movie to me and my kinsman. While the crowd kept increasing and the man’s accusation and claims kept coming, a security man from a nearby bank came to the scene. When he inquired from the man of what happened, he narrated the same thing to him. So the security man ordered us to come with him. We followed him to the bank’s vicinity. On getting there, he asked the man same question again to tell him what happened, the man still maintained his ground. The security man called a motorcycle operator, who conveyed the man and my brother to police station. I was not asked to follow, I was amazed.

I left in pain and shame as to what could happen to my kinsman before I could get help for him as they told me where they were going. I took my phone and called his elder brother who rushed to the police station and freed him the same day.

We could have been murdered for no reason that day, if God had not kept the passers-by away from resorting to jungle justice. And people would have believed that we were robbers indeed. If this had happened in some other states where jungle justice is prevalent, no one would have listened to us. They would have started hitting us with all manner of objects and finally set us ablaze, even when we knew nothing about the allegation. No doubt some of the persons killed over allegations of crime, would certainly have been innocent of the allegations.

The next time you want to participate in hacking someone to death, do not forget that the suspect could be innocent of the allegation. Never attempt to take away a human life that you cannot create, for such action comes with grievous consequences.  If anyone is accused of any offence, hand him or her over to the police or any other authority for interrogation and possible prosecution if the security agents find enough evidence to do that.

Our lives would have been cut short if God of justice was not on our side that day. But not everyone could be this lucky. Sometime, this thing happens like a flash, especially in the market places, something may actually get missing, while the person that stole it has left the scene, the body language of another around there tells you something that suggests that he or she is the culprit and you raise a false alarm.

Off all the Nigerian politicians that have been convicted of stealing or embezzlement, none has ever been lynched. Just recently, there was a disturbing news emanating from Joint Admission and Matriculations Board office that a snake swallowed N36,000 000 (Thirty Six Million Naira). No one lynched or mobbed this suspect.  If no one kills these people as huge as their criminal acts are, why then should somebody lynch a suspect for stealing garri, wears or any other food items probably to cure hunger.

While we kill our own brothers and sisters with our own bare hands, the major criminals walk freely and enjoy live even better than us. You see them everywhere. They may not have gun. Their gun might be their pen in various offices, manipulating figures to their own advantages. Yet we can’t lynch them.

The mobile network operators exploit their customers on daily basis through illegal charges and deductions. If for an instance, a network provider charges 100,000 customers N5 each for an unnecessary service which these customers never solicited for, the amount, N5, may mean nothing to each subscriber, but sum up N5 X 100,000, it is a whooping sum of N500,000. Of course, you know that these charges range from N30, N50, N100, and so on.

These are ‘corporate thieves’ that have walls of defence around themselves. You dare not talk about the banks.

Say no to crime! Say no to jungle justice!

Related Topics:Jungle Justice And The Blood Of The Innocentslideshow
Up Next

Banters In Lagos, Poverty And Disease In The Niger Delta

To sustain the infrastructure renewal in Lagos