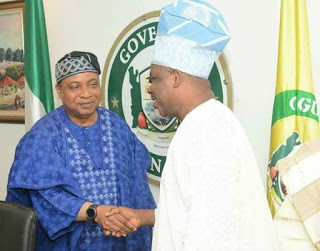 As far as land grabbing in the South West is concerned, the name Mutairu Owoeye will definitely spring up.
Owoeye, is not a youngman, but an elderly person who makes a living grabbing people’s lands. From Lagos state to Ogun state and even Ekiti state and environ, his name is now almost legendary. On several occasions, the man has laid siege on communities in Lagos state including areas such as Bolorunpelu and Baba Adisa, all in Ibeju Lekki Local Government area.
Owoeye care less if his employees are the real owners of the land that he is defending as long as he gets compensated either in cash or lands.
Presently, he is currently occupying Isoso community, GRA Quarters, a community in Sagamu, Ogun state, and reports of his nefarious activities alongside his over 200 armed thugs have been abound. According to reports, his boys have vandalised property worth millions of Naira.
Sources close to www.theoctopusnews.com, revealed how the man along with his boys have been causing mayhem in the community shutting down business activities and raiding houses in the neighborhood.
Interestingly, this is happening at a time when the Ogun State Governor, Senator Ibikunle Amosun recently signed a bill into law which prescribes 25 years imprisonment or death sentence for anyone found guilty of land grabbing.
According to the bill signed by Gov. Amosun, the law criminalises land grabbing or forceful takeover of landed property in the state.The bill was passed on October 11, 2016. It is titled, “H.B. No. 03/2016 – A bill for a law to prohibit forcible entry and occupation of landed properties, violent and fraudulent conducts in relation to landed properties, armed robbery, kidnapping, cultism and allied matters and for other matters incidental thereto or connected therewith.”
The law also prescribes death sentence when a life or lives are lost in such forceful takeover of land. Kidnappers also risk life sentence.
Interestingly, the same law applies in Lagos state, where Owoeye also operates, but no one has been able to call him to order, giving the impression that he is an untouchable.
Shockingly, there have been reports of when the man has allegedly used men of the Special Anti-Robbery Squad (SARS) as back up for his operation.
The land dispute in Isoso community, GRA Quarters involves two families and three hectares of land. In the heat of the dispute, both went to court securing the same Supreme Court judgment ceding the three hectares to the two families, but with a clause that they must be in consent whenever any of the parties decides to sell out of the property.
However, one of the families reportedly invited Owoeye to come and help defend the land from the other family.
Interestingly, despite the fact that the elders of the community have reached out to the Ogun state Governor, Senator Ibikunle Amosun, Inspector General of Police  Ibrahim Idris and other security agencies via petitions nothing has been done.
The situation thus makes the question of if Owoeye is an untouchable in order.
Post Views: 3,157

Should We Vote Him In: Donald Duke Says He Wont Criminalize Gay If He Becomes President