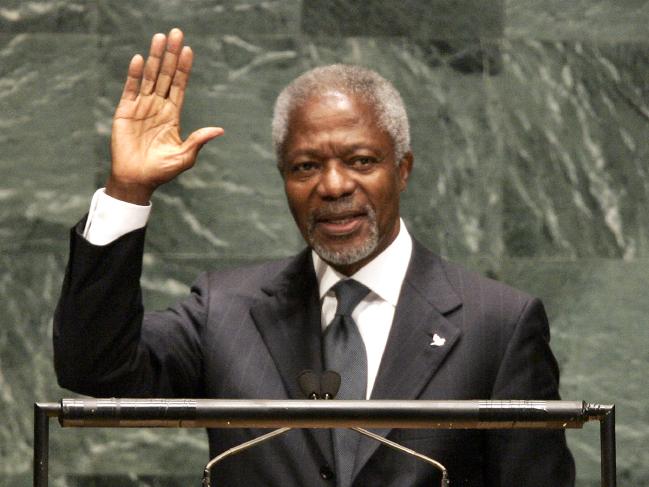 Annan died in the early hours of Saturday, August 18, in Switzerland after a short illness.

A statement released by the family confirmed his death. The deceased, a Nobel Peace Laureate was the seventh Secretary-General of the UN from January 1997 to December 2006, and became the first black African man to take on the top job as the world’s top diplomat.

“His wife Nane and their children Ama, Kojo and Nina were by his side during his last days,” it said.

A selfless man, he reached out and touched many people with his deep compassion and empathy. He was a man who placed others first, radiating genuine kindness, warmth and brilliance in all he did.

It is with immense sadness that the Annan family and the Kofi Annan Foundation announce that Kofi Annan, former Secretary General of the United Nations and Nobel Peace Laureate, passed away peacefully on Saturday 18th August after a short illness…

The United Nations Migration Agency also confirmed his death in a tweet, saying: “Today we mourn the loss of a great man, a leader, and a visionary: former @UN Secretary General @KofiAnnan. A life well lived. A life worth celebrating.”

Today we mourn the loss of a great man, a leader, and a visionary: former @UN Secretary General @KofiAnnan.

A life well lived. A life worth celebrating. pic.twitter.com/z51WTB4Y65

Since his death, encomium has been pouring in.United Nations chief Antonio Guterres voiced deep sorrow at the news his predecessor had passed away, calling him “a guiding force for good”.

“Kofi Annan was a guiding force for good,” Guterres said in a statement shortly after news broke of Annan’s passing.

“In many ways, Kofi Annan was the United Nations. He rose through the ranks to lead the organisation into the new millennium with matchless dignity and determination,” he added.

“Kofi was humanity’s best example, the epitome, of human decency and grace. In a world now filled with leaders who are anything but that, our loss, the world’s loss becomes even more painful,” he said.

“He was a friend to thousands and a leader of millions.”

His home country of Ghana has now declared a week of mourning after his death.

Describing Annan as a “consummate” diplomat, Ghana’s Presdient Akufo-Addo said in a statement that Ghana was “deeply saddened” by news of his death.

Mr Annan was born in Kumasi, Ghana, on April 8, 1938. He studied at the University of Science and Technology in Ghana and completed his undergraduate work in economics at Macalester College in St. Paul, Minnesota in 1961.

From there he did his graduate studies at the Institute of International Affairs in Geneva, and in 1972 earned a Master of Science degree at the Massachusetts Institute of Technology’s Sloan School of Management.

He is fluent in English, French and a number of African languages. He went on to meet his wife, Nane, and they had three children Ama, Kojo and Nina.

He was the first Secretary-General to be appointed from within the organisation’s ranks. He first joined the UN in 1962 as an administrative and budget officer with the World Health Organisation in Geneva,

He later served with the Economic Commission for Africa in Addis Ababa, the UN Emergency Force (UNEF II) in Ismailia, the United Nations High Commissioner for Refugees (UNHCR) in Geneva.

Before he went on to be Secretary-General, he was Under-Secretary-General for Peacekeeping. Mr. Annan also served as Special Representative of the Secretary-General to the former Yugoslavia (1995-1996), and facilitated the repatriation from Iraq of more than 900 international staff and other non-Iraqi nationals (1990).

Faces Of Nine Bankers Declare Wanted By The Police