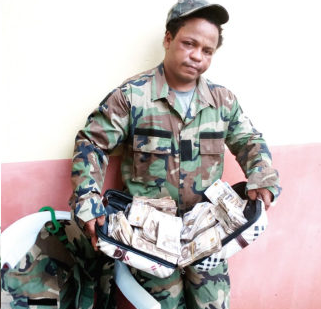 A dismissed US soldier identified as Garrick Slacks has been arrested by the Imo state police command.

He was arrested following his culpability in a visa fraud. Slacks came into Nigeria with the sole aim of defrauding ladies, with fake promises of marriage and helping them secure visas and other travelling documents to US.

According to Southern City news, Garrick was arrested on Saturday July 28th. A police source said Garrick would collect money from his victims and immediately relocate to another area where he would also defraud other women.

“He was a serial fraudster who had used his position as a foreigner to defraud Nigerians, who are desperate to travel abroad, especially to the US. He is a serial and sophisticated fraudster. He was arrested this afternoon (Saturday) while he was hurriedly leaving Owerri for Port Harcourt. He is equally impersonating the US Army and Nigerian Army at the same time. His targets are mostly women. He would promise them marriage and tell them that he had the capacity to secure their visas and other travelling documents to America with his position as a colonel in the US Marine Army and as an American citizen. He has confessed to the crime and the forensic investigation we have done using his fingerprints revealed that he is a wanted man in California and he only ran to Nigeria in February to continue his heinous crimes.

“Just five days ago, he defrauded a young widow N500,000 with a fake promise that he would secure stay visa for the widow’s three children. He was about running away from Owerri before we tracked him. Could you imagine that the lady we used in tracking him, he had promised to marry her on meeting her for the first time this afternoon (Saturday).” the police source said

Items found on the suspect include a cash of over N2m, two pairs of military uniform, military fez cap, jungle boot, fake military identity card, fake driving licence and a car, which he used in making his fraud look real.

Garrick who has confessed to the crime, said he was dismissed from the US military in 2015 over his involvement in cocaine peddling and came into Nigeria in February to defraud people. He said he was ready to refund one of his victims (the widow) her money.

Related Topics:Garrick SlacksHow Dismissed US Soldier Defrauded Women With Visa Opportunity In Owerrislideshow
Up Next

RE: Oshiomhole Lacks The Intellectual Capacity To Lead APC