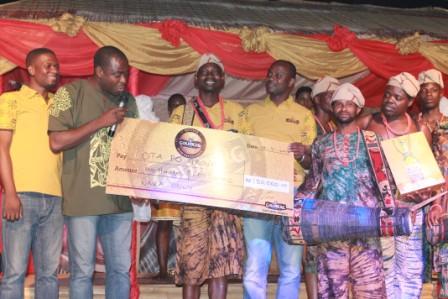 At the commencement of the event on Friday, February 17, 2017, 12 groups auditioned at the cultural centre, venue of the event, with five groups emerging from the pool to reach the grand finale.

The traditional drummers contest which was organised as part of the Goldberg Excellency Tour kicked off with a procession through the major streets of Abeokuta and attracted a huge turnout of residents who were delighted by performances from drummers, praise singers and dancers. The procession helped to pull a large turnout of residents who trooped to the venue of the contest to support their groups during the different performances.

‘The Excellency Tour will resonate the brand’s essence and strengthen its identification with the cultural values of the people of South West Nigeria,’ Ayeni affirmed. He added that in line with the brand’s ethos, the successful event in Abeokuta also helped to promote local talent, as the competition brought out the best skills from the performers who see the contest as an opportunity to showcase their talents and skills.

While commenting on their victory, the leader of Otapo Bata Drummers, Mr. Afolabi Mufutau, said it is a thing of joy to see his group clinch the first prize after putting in putting in many hours of hard work in preparation for the competiton.

The Goldberg Excellency Tour is coming on the heels of the unveiling of Goldberg lager beer as “Your Excellency” in 2016 and it is in line with the brand’s unique credentials that positions it in a class of its own, away from its peers in the market.

How President Trump’s Turbulent 30 Days in Office May Lead To His Impeachment.

5 Causes and Remedies For Back Pain