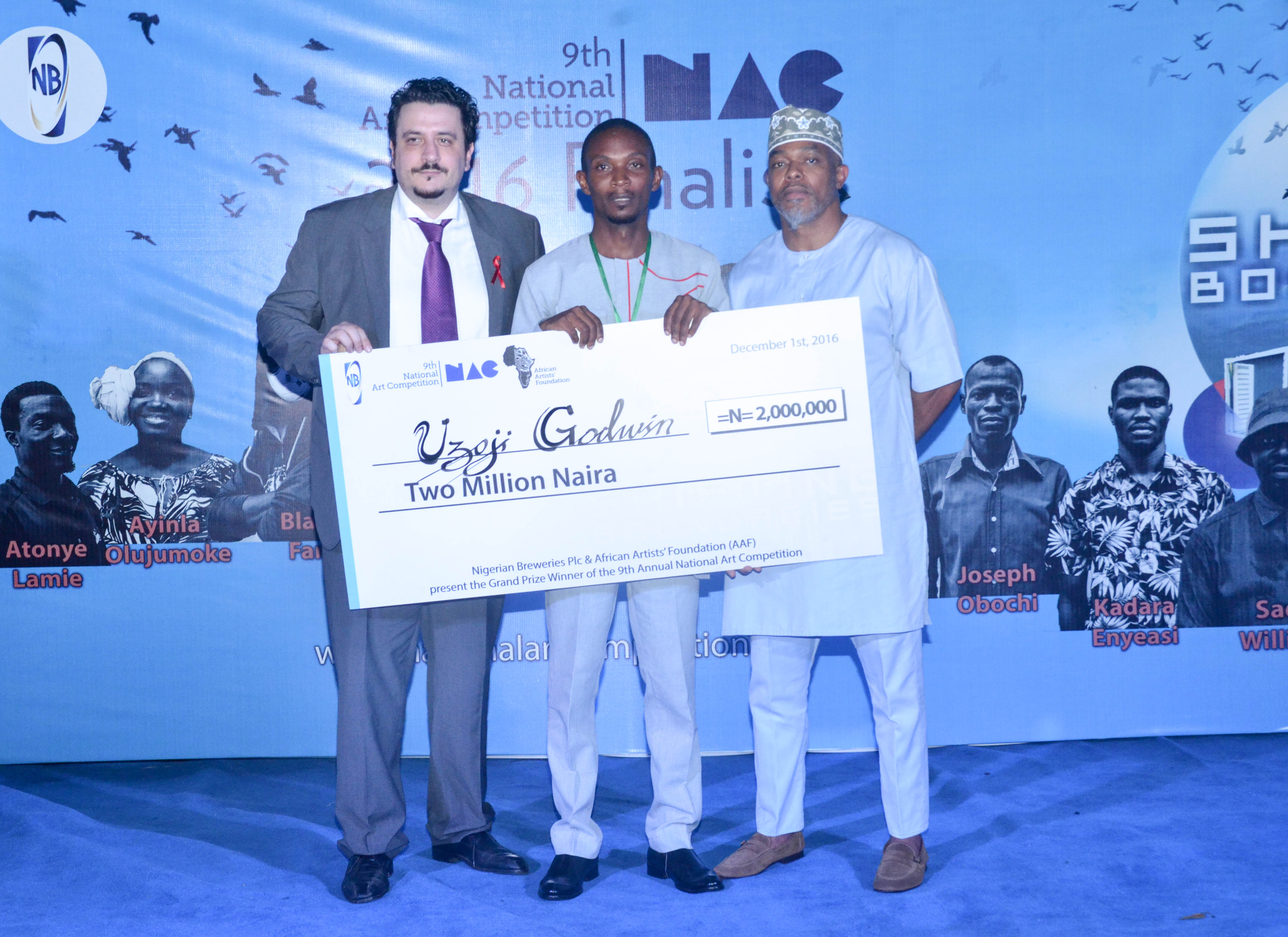 Homelessness, Despair and Hope, a work that elucidates the issues that surround the condition of the Internally Displaced Persons (IDPs) by using the Tent as a metaphor for those who have lost their physical boundaries by the share brut of force, was adjudged the overall winner of this year’s National Art Competition held at the premises of the African Artists Foundation in Victoria Island, Lagos on Thursday, December 1, 2016. The masterwork was created by Godwin Uzoji, a sculptor who specializes in drawing attention to important human issues and conditions in the larger society.

Twelve finalists had gone through a rigorous selection process and a workshop to qualify to exhibit at the finals of the competition that was themed “Shifting Boundaries”, a topic that challenges artists to especially question and manifest through their work what a boundary means to them with an emphasis on the shifts, changes, and transformations that influence the boundaries of our modern world. Homelessness, Despair and Hope sees the boundaries as the edges of peoples’ comfort zone and that any involuntary shift in these boundaries, most often result in unpleasant conditions. Using the Tent made of coconut shells as a motif to signify movement, transiency and an ephemeral state, the work portrays the realization that the tent cannot shelter against the harsh conditions of the elements representative of the everyday challenges that the IDPs face in their camps. The work however rekindles hopes as depicted by silver and gold foil forming a linear pattern around the tent to show that hope can be sustained by the collective effort that can be channeled towards alleviating their plight. The introduced jute bags represents the little effort directed at the IDPs.

The work, a call on us all, especially those saddled with responsibility to alleviate the difficult situation of the IDPs, earned the affirmation of the judges to guarantee Uzoji’s place as the winner of the 9th National Art Competition.

In a remark at the event, the Managing Director and Chief Executive Officer of Nigerian Breweries, Mr. Nicolaas Vervelde, represented by the company’s Sustainability and Regulatory Relationships Manager, Mr. Edem Vindah, emphasized that the company’s commitment to identifying and developing talents in the arts, is in line with its philosophy of Winning with Nigeria. “Through the use of creative artistic expression, the National Art Competition showcases emerging talents in diverse mediums like painting, sculpture, photography and mixed media. We are proud that the National Art Competition has become a leading platform for the development of talents in Nigeria.”

This year, over 500 entries were received out of which twelve finalists were chosen to take part in an artist retreat, where workshops by leading arts professionals allowed finalists the opportunity to make out the conceptual threads of their proposals. The finalists then embarked on the production of their projects which culminated in the exhibition and judging ceremony.

Nigerian Breweries has sponsored the organisation of the National Art Competition by the African Artists’ Foundation for nine consecutive years. This is part of an effort to encourage and promote the development of creativity, arts and artists in Nigeria.

GLOBAL INTERNS DESIGNS “A LEADERSHIP THROUGH INTERNSHIP” WORKSHOP FOR MILLENNIALS