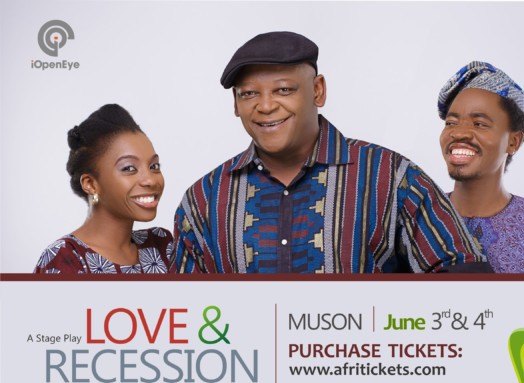 Nigeria’s most innovative and customer-friendly telecommunication company, Etisalat has again reaffirmed its commitment to the development of the Nigerian creative industry and home-grown talents by sponsoring the second edition of the popular stage production, Love and Recession.

The play, which premiered in December 2016, was well received by stage play enthusiasts and art lovers across the country. By popular demand, producers of the play, Iopeneye Limited, will restage the play with support from Etisalat Nigeria, on the 3rd and 4th of June, 2017 at the Muson Centre, Onikan, Lagos.

The producer and director of the play, Ifeoma Fafunwa, said since the satire, which addresses social norms such as the pressure young women and men face regarding getting married, particularly in times of economic recession, was staged in Lagos last year, they have been inundated with requests by people who want another opportunity to see it.

According to Head, Events and Sponsorship, Etisalat Nigeria, Modupe Thani, the telecommunications giant’s continued sponsorship of the play and Iopeneye Productions stems from its overarching committed to supporting arts development in Nigeria.

Thani said “We at Etisalat are proud to continue to support Iopeneye Productions, whose plays such as the popular ‘HearWord’ and the more recent ‘Love and Recession’, have themes that address important social issues that affect Nigerians. With partnerships like this, Etisalat Nigeria has consistently supported the development of the Nigerian creative industry and all forms of African arts: drama, music, photography, and literature. We remain committed to supporting arts and other aspects that are of interest to our customers.”

Etisalat has over the years supported the creative industry in Nigeria through event sponsorship such as Ake Art Festival, Lagos Photo competition and its own flagship literary award, Etisalat Prize for Literature which is becoming increasingly popular allover Africa and beyond.

I Will Marry Again If God Says So-Doris Simeon