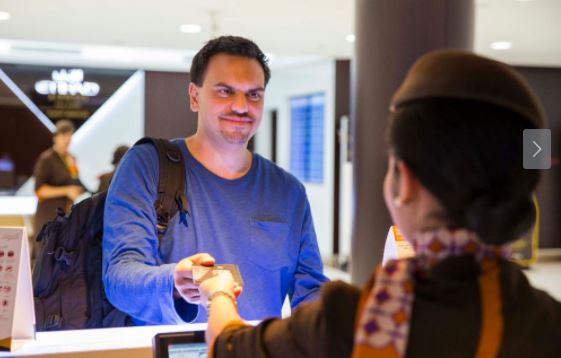 Senior Etihad Airways executive, Andrew Fisher, embarks on a journey of a lifetime on 21 January when he attempts to break the world record by flying around the globe in the shortest time frame on scheduled flights, and with the fewest number of sectors.

Fisher, who works as the airline’s Vice President Fleet Planning, hopes to shave three hours off the current record of over 55 hours by completing the journey in only four sectors.

A self-proclaimed ‘aviation geek’ with a love of studying airline networks and schedules, Abu Dhabi-based Andrew is well placed to chart his journey and fulfill a dream he has been keen to attempt for over 20 years.

“It’s about time the job was done,” he said. “The planning has taken a long time, essentially to ensure the flight timings, routings and transits are kept as tight as possible and there is only a short window of opportunity for this to happen.”

Picture Caption: Etihad Airways senior executive, Andrew Fisher, jets off from Abu Dhabi International Airport to Shanghai ahead of his round the world record-breaking attempt.

Related Topics:Andrew FisherETIHAD AIRWAYSETIHAD AIRWAYS EXECUTIVE EMBARKS ON ROUND THE WORLD RECORD ATTEMPTslideshow
Up Next

Travel trends to expect in 2018