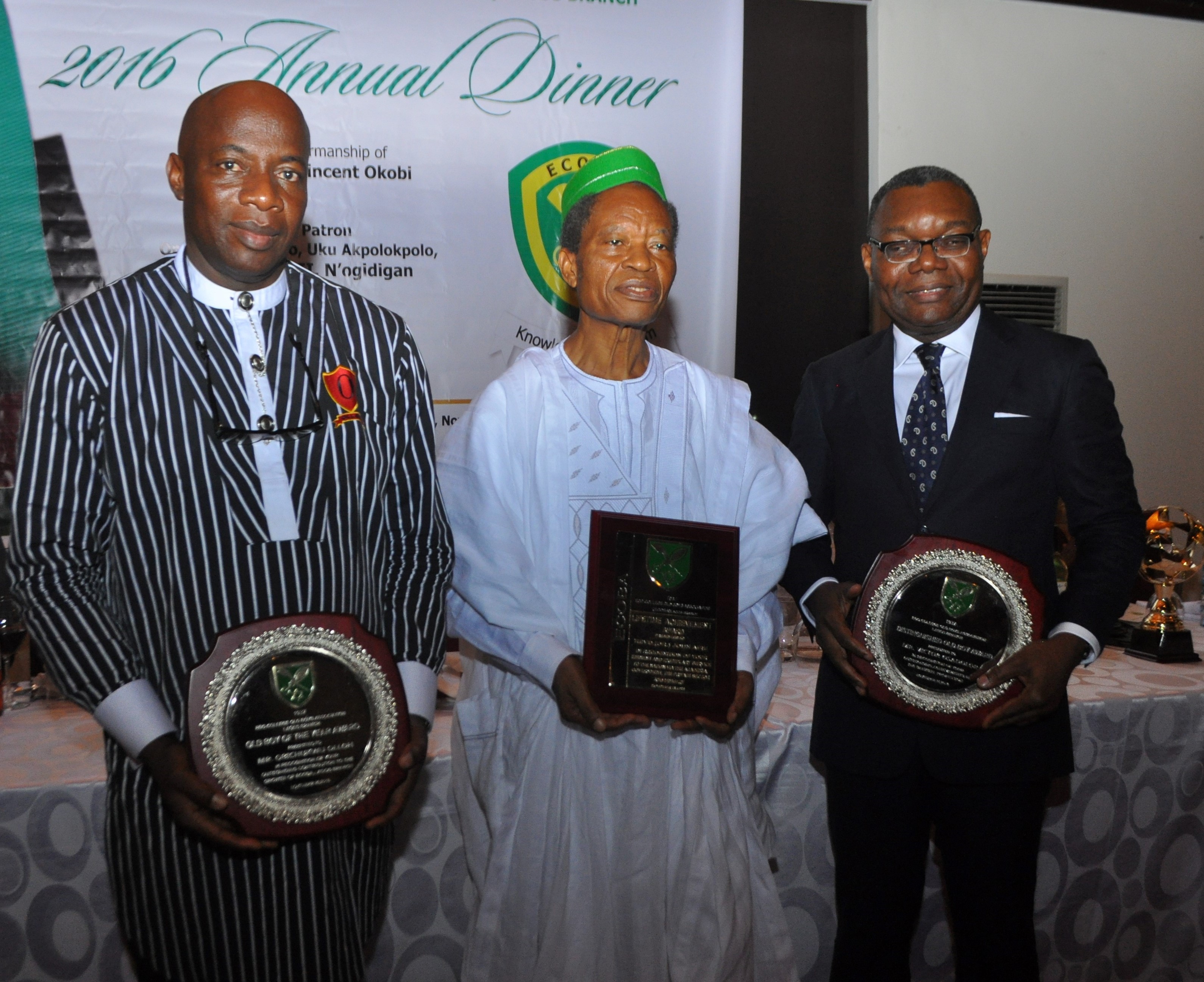 The 2016 annual dinner of the Edo College Old Boys Association (ECOBA), Lagos Chapter would ever remain memorable as the ceremony which serves as a forum for members of the association and their families to reunite and share ideas, was also used to honour three distinguished members who have excelled in various professions and whose works have contributed immensely to the development of the country and Edo College, Benin City.
The annual dinner which was held on Saturday, November 26, last week at the Metropolitan Club, Victoria Island, Lagos was well attended by members of the association in all walks of life and was chaired by Ambassador Vincent Okobi.
Recipients of the awards were a former Commissioner for Trade and Industry in the defunct Midwest region and also a religious leader, Rev. (Dr.) John U. Aire; who was conferred with a life time achievement award;  the Deputy Group Managing Director, United Bank for Africa Plc (UBA), and Chairman of UBA Pensions Custodians Limited, Group Mr. Victor Osadolor, a reputable bank who was recognised for excellence in the banking profession; and Mr. Obichukwu Olloh, who received the old boy of the year award for his hard work and dedication to the development of ECOBA.
While commenting on the award, Rev. (Dr.) Aire affirmed that it is a wonderful way in which ECOBA encourages performance and integrity among its members. He said it is a way of letting members’ remember that they attended a secondary school that laid an ethical foundation for them. ‘This recognition is something l welcome with great humility, and l attribute it to the work of God,’ he said.
Receiving the award, Osadolor who has worked very hard in the banking profession for over 27 years, commended the association for the recognition and promised to work harder in ensuring a more robust banking sector and for the growth of the association.
Osadolor, who attended Edo College, Benin City between 1977 and 1982, holds a second class (Upper Division) BSc (Hons.) degree in Accounting from the University of Benin. He is a fellow of the Institute of Chartered Accountants of Nigeria (ICAN), an alumnus of Harvard Business School’s Advanced Management Programme, and an honorary life member of the Chartered Institute of Bankers of Nigeria (CIBN).
Speaking at the ceremony, the Chairman, ECOBA, Lagos Chapter, Mr. Godwin Ize Iyamu  said as a tradition, the awards are bestowed on deserving old boys who have made exceptional life time contributions to a profession, industry, government, arts, sciences, business or any vocation, and doing so have brought honour to Edo College. He therefore stated that the recipients deserve the award as they have worked relentlessly to ensure advancement in both the public and private sector.
According to him, the annual dinner is also a time to work with the national association, to give back to the school in terms of corporate social responsibility (CSR) initiative such as the education fund, where prizes are awarded to students who have excelled in various subjects.
Post Views: 645