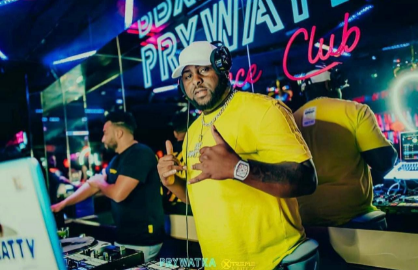 It is safe to say that Afrobeats has soundtracked and dominated the world in the last few years, finding its way into Grammy conversation, catching fire, and storming the charts, the head-spinning style that fuses Afro-pop, Afro-fusion dancehall, reggaeton, and more has now become a global sound and the role DJs play in powering the hybrid genre popularity cannot be underestimated, pushing weighty club rhythms into interesting new areas.
Ezimah Friday Natty popularly known as DJ Natty [Magic Fingers] is an international DJ who has consistently enthralled crowd across the world in different countries in the last 5 years, with his fast fingers, multi-layered mixing, and boundless energy while staying strong to his roots by showcasing the inventive sounds of Afrobeat and other sub-genres from across the African continent in Europe.
Nigeria born, Poland based DJ Natty best known for his diversity on the wheels of steels rose to prominence after his first Poland tour in 7 different cities in Poland and other countries in Europe pushing line-ups that are ahead of the curve, and ever since he has been the darling of Afrobeat lovers in Europe, playing as host DJ to superstar Afrobeats artists such as Teni, L.A.X, Iyanya, Solidstar, Jmartins and a whole lot of others.
This international Afrobeat DJ who is also a recording artist, Hypeman, and performer offers something different entirely than the average humdrum selections of DJs dominating clubs across Europe, his effortless transitioning from Afrobeats, tapping into the mood and energy around him, and sometimes reaching even more widely into other world genre leaves audience anticipating what’s to come next. The exciting talented DJ plays in some of the top clubs in Warsaw such as N58, F House, The Fiesta Latino, among others.
Away from the deck, DJ Natty has followed the footsteps of people like superstar DJ Khaled who are known for putting out amazing records. He released his first official afrobeat single featuring Jaywon titled “MY BABY” followed up with “GIDEM” featuring El Sammy and F.A, and a few months ago he puts out a new record titled “COOL DOWN ” which features Liberian singer F.A. with a befitting visual. This cemented his place as not just a great DJ, made him undeniably one of the biggest on the scene.
Post Views: 132