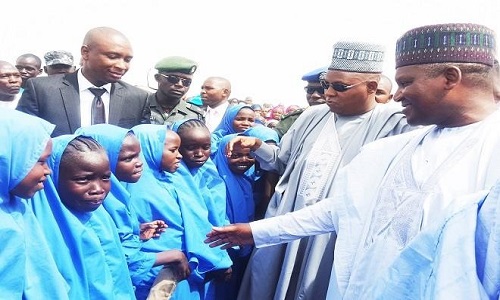 The President of Dangote Group, Aliko Dangote, monday broke another record by making the single largest donation by an individual of N2 billion to persons who have been displaced by the Boko Haram insurgency in Borno State.

Dangote, who made the pledge while touring internally displaced persons (IDPs) camps in Dalori and Bakassi in Maiduguri, the Borno State capital, equally made a commitment to end malnutrition, hunger and starvation in the camps and other parts of the country.

He said the first tranche of N2 billion would be immediately disbursed towards ending what has become a major humanitarian crisis in the country.

Dangote said apart from the funds and food items that will be donated by his company through the Dangote Foundation, he would explore avenues to drive investments and production in the state in order to promote entrepreneurship and create opportunities for the people to work and earn a decent living in the course of time.

“This is not the first time I am coming here and it will not be the last. So far, we have expended about N1.2 billion in efforts to alleviate the suffering of IDPs across Borno, Adamawa and Yobe States.

“The first major challenge is the physiological needs of these people, and food, nutrition rank right on top of that ladder. So we will first make serious effort to ensure that hunger is eliminated from the IDP camps and thereafter, we will begin to make effort to create jobs and boost entrepreneurship.

“The effort to create jobs and boost enterprise in this case will not be about making money or returning investment, rather it will be primarily to create opportunities for the people,” he said.

Dangote expressed concern over the living conditions of the estimated 1.7 million people displaced in the state, making it the third place globally with the highest number of displaced persons after Syria and Afghanistan.

Speaking at the event, the governor of the state, Kashim Shettima, conveyed the gratitude of the government and people of the state to the Dangote Group for its concern for the plight of the people of his state who he said had suffered unimaginable devastation.

“Words are not enough to say how grateful we are and we must thank Aliko Dangote. In this crisis, he has stood with us firmly. Initially he gave us N400,000,000 to alleviate the suffering of our people and it was given to 40,000 people in Borno.

“Our people are in dire straits and there is only so much that we can do with our limited resources. But you have done so much for us, you have given money, you have given food – spaghetti, rice, sugar and so on. Only Allah will compensate you,” Shettima said.

Also speaking at the event, the Executive Director of Dangote Group, Halima Aliko-Dangote, stressed that her father, apart from the direct support he would be giving to the people, would also pull his partners and contacts in the private sector to collaborate and support the people of the state.

“As executive director on the board of the foundation, it was very important for me and others to actuality visit the IDP camps in Borno State ourselves. This experience has solidified our commitment to support the people during this difficult time,” she said.

The Managing Director and CEO, Dangote Foundation, Mrs. Zouera Youssoufou, stressed that after dealing with the issue of hunger, the group will begin to boost education for children in the camps as well as create opportunities for enterprise.

“This is not the first time that I have visited the IDP camps and the Dangote Foundation’s commitment to easing the suffering of our fellow Nigerians is total.

“As early as next week, we will be meeting with the governor and his team to immediately start to bring relief and begin to think of medium-term strategies especially around education.“We will deploy all within our capacity, both man and material, to ensure that we improve the lives of these people,” she said.

The Shehu of Borno, Alhaji Abubakar Umar Garbai El-Kanemi, in his remarks, said that the people of the state are peace loving and humble, stressing that the mayhem of Boko Haram which had seriously challenged the state was perpetrated by people from outside the state and even outside the country.

He expressed gratitude to the Dangote Group for the gesture and encouraged other well meaning Nigerians to tow the same line in order to help the state get back on its feet.