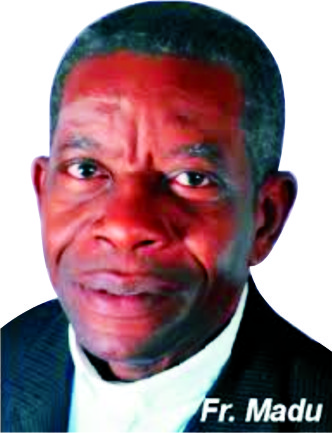 The Rector of Imo State Polytechnic, Umuagwo, Rev. Fr. (Dr) Wence Madu, who has been in the eye of the storm for some time now, for his refusal to vacate office, months after the expiration of his tenure is presently enmeshed in a multi million naira contract scandal.

According to reports, a company with the name Temios Nig. Ltd located at “190 Wetheral Road Street Owerri”, whose Director, Nsoha Polycarp Chidi is also the Manager of Imo Poly Micro Finance Bank was awarded a contract of N83,512,375.00 for the supply of some equipments to the institution. The contract amount was alleged to have been diverted to personal use, as no single equipment was supplied.

In a letter captioned “Supply and Installation of various Agricultural Research and Nutrition Laboratory, NBTE specified equipments as in TETFUND AIP Nos. 14, 22, 26 and 38-44 valued by TETFUND at N83,512,375.00 with reference No. IMO POLY/CR:79.T/11/24 of 12th March 2014 and signed by the Registrar of the Polytechnic, Mrs. S. Njemanze, the company was authorized to supply the equipment to the institution.

Investigations reveal that Nsoha Polycarp, who doubles as Director of Temios Nig. Ltd and Manager of Imo Poly Micro Finance Bank, on 19th December 2014, wrote a letter, captioned, “Request for the payment of N20, 000,000 for 2013 TETFUND intervention and addressed to the Rector, who quickly approved the request and minuted to the Bursar, same day to pay as directed.

A source in the school, who confided in this reporter said, “the haste with which request for the payment of the 20 million naira which is part of the total contract sum was approved, in less than twelve hours, makes it obvious that there is a collaboration between Dr. Wence Madu and the contractor, who aside from unlawfully being Manager of Imo Poly Micro Finance Bank, is also the Rector’s kinsman and has become notorious for executing questionable contracts for him through Temios Nig. Ltd”.

It was also revealed that no single equipment was supplied in respect of the above contract, as the money was allegedly diverted and shared by the Rector and his cohorts. “There have been several of such cases where contracts are allegedly awarded, just to siphon money and this is just one of such cases. What the Rector often does whenever an accreditation team intends to visit, is to hire and parade equipments from other institutions which he falsely claims belong to Imo Poly just to scale the accreditation hurdle without considering the negative impact, the absence of such equipments on the school, the students and quality of learning”.

There are also reports that Dr. Wence often publicly boasts that he will be Rector of Imo Poly for as long as he wants, inspite of the fact that his tenure has expired because he does not “chop” alone.

Some members of the academic community who spoke on condition of anonymity said, “these and other alleged scandals involving huge sums of money, give a clue to why the embattled Reverend Father turned Rector, has vehemently refused to heed wise counsel and vacate office at the expiration of his tenure, several months ago, as stipulated by law. He has mortgaged his conscience, the honour of his revered calling on the altar of greed, and pecuniary benefits”.

When contacted for comments, Mr. Nsoha said he is no longer a Director of Temios Nig. Ltd. It was however gathered that, he had already been appointed Micro finance manager of the company as at the time the contract in question was awarded. This, according to legal pundits, is not only unlawful but necessitates punitive sanctions against him, Dr. Wence Madu and all those involved in the scam.

When also contacted, the Public Relations Officer of the school, Mr. Oparaocha said he was not aware of any contract scandal but stated that the Rector cannot be involved in any contract racketeering in view of his love for due process and excellence.