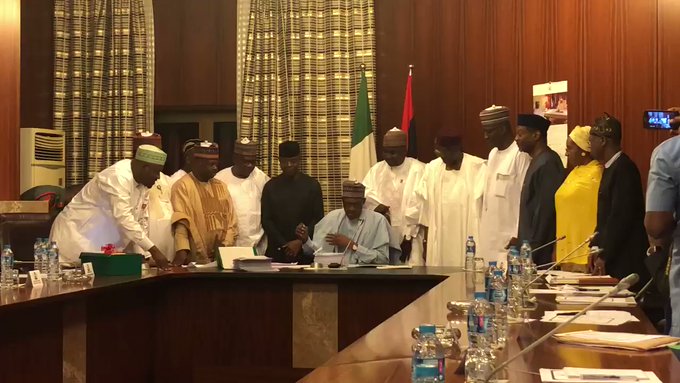 The 2018 Appropriation Bill has been signed into law by President Muhammadu Buhari. The bill was signed on Wednesday a few minutes after noon.

The Presidency had earlier announced plan by President Buhari to ascent to the bill today.

Expressing disappointment over  the decision of the National Assembly for inserting 6, 403 projects to the tune of N578 billion while discarding some projects proposed by the Executive, Buhari puts the entire cut from his budgetary proposal at N347 billion.

He said the slashed amount was for 4,700 projects spread across the country.

The President explained that, “Many of the projects cut are critical and may be difficult, if not possible to implement with the reduced allocation.”

He argued that some of the inserted projects by the National Assembly were not properly ‘conceptualized, designed and costed,” thus will be difficult to execute.

“I would like to thank the leadership of the National Assembly, particularly the Senate President and the Speaker of the House of Representatives, as well as all the Distinguished Senators and Honourable Members, for passing the 2018 Appropriation Bill, after seven months.

I thank you and may God bless Nigeria.”