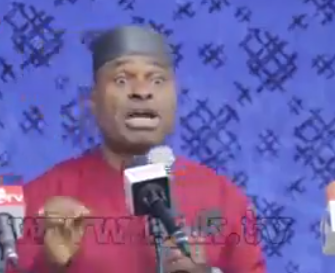 Actor and politician, Kenneth Okonkwo, is definitely a man who doesn’t like to be criticized.

Days after saying that people from the South East would wander if President Buhari doesn’t win the 2019 election, he came under serious criticism.

Rather than take it in his stead, Okonkwo has been reacting and in an unpalatable way too.

Okonkwo has been cursing his critics who he has termed “Satanically motivated and ignorant.”

Read his reaction in full below

Reacting to the backlash he has received so far, Kenneth on his IG page, tagged those attacking him as ”ignorant and satanically motivated persons”. Read his reaction below

My attention has been drawn to some negative comments and curses poured out against my person by some ignorant and satanically motivated persons because of my preference of President Muhammadu Buhari as President of this country for his incorruptible and firm character against enemies of Nigeria. I have been laughing at their ignorance and wickedness. First, these men have not offered any alternative party or Presidential aspirants to challenge Buhari or be compared with him. Second, they claim they are Igbos but forgot that in Igboland, it is a cardinal principle and custom that you must respect someone’s personal opinion and must not curse the person, if what the person simply did was to express his opinion and nothing more, “uche onye adighi ya njo”. Even if a person says anything you don’t like, provided he did not curse you, you are permitted to throw away his words but restrained by custom and tradition not to do anything to him. Third, the Nigerian constitution said in section 39 that “every person shall be entitled to freedom of expression, including freedom to hold opinions and to receive and impart ideas and information without interference”. Also in section 38, the constitution states “every person shall be entitled to freedom of thought, conscience… including freedom to change his … belief, and freedom (either alone or in community with others, and in public or in private) to manifest and propagate his belief in teaching, practice and observance”. God himself created man a free moral agent to hold his thoughts and express his opinions as he wishes. He did not even compel man to worship Him. So these army of ignorant and wicked men are simply trying to rudely and crudely interfere with my traditional, constitutional and religious rights to freely express myself and hold an opinion, belief and thought as I so wish.

Let me reiterate that I am a follower of President Buhari and believe in his integrity and good intentions to better the lots of Nigerians and that of Ndigbo and I have no apologies for this. Whoever disagrees with me should produce his own strong reasons and better alternatives.Since these men did not do this, but resorted to curses and vituperations, they have violated the law of nature, man and God. Here is the verdict of God on them according to Psalm 109 and particularly verses 1-3, 6, 17-21, 25-30.For the avoidance of doubt let me reproduce these verses verbatim:“(1) Hold not thy peace, O God of my praise; (2) for the mouth of the wicked and the mouth of the deceitful are opened against me: they have spoken against me with a lying tongue. (3) they compassed me about also with words of hatred; and fought against me without a cause. (6) Set thou a wicked man over him: and let Satan stand at his right hand. (17) As he loved cursing, so let it come unto him: as he delighted not in blessing, so let it be far from him. (18) As he clothed himself with cursing like as with his garment, so let it come into his bowels like water, and like oil into his bones. (19) Let it be unto him as the garment which covereth him, and for a girdle wherewith he is girded continually. (20) Let this be the reward of mine adversaries from the Lord, and of them that speak evil against my soul. (21) But do thou for me, O God the Lord, for thy name’s sake: because thy mercy is good, deliver thou me. (25) I became also a reproach unto them: when they looked upon me they shaked their heads. (26) Help me, O Lord my God: O save me according to thy mercy: (27) That they may know that this is thy hand; that thou, Lord, hast done it. (28) Let them curse, but bless thou: when they arise, let them be ashamed; but let thy servant rejoice. (29) Let mine adversaries be clothed with shame, and let them cover themselves with their own confusion, as with a mantle. (30) I will greatly praise the Lord with my mouth; yea, I will praise him among the multitude.”

Just to remind you but a few. Before Buhari came in, terrorists bombed to pieces, 88 persons at Nyanya in Abuja, bombed the United Nations Building in Abuja, bombed Banex Plaza and even the police headquarters in Abuja killing uncountable number of persons. I don’t need to mention the entire North East that was overun by terrorists with thousands of people beheaded and the video images sent on internet for everybody to see. The terrorists were everywhere and have started forming cells in Lagos and Enugu. This Government came and destroyed them across the country. Only their remnants now are going about carrying out criminal activities and you are telling me security is not better now. Our soldiers and officers were sent to fight these terrorists without weapons. They were dying like chicken and when they complained about lack of weapons, they were sentenced to death for mutiny. No apologies for supporting Buhari. I respect your views. I not only support him, I pray for him.

You know the truth, the worst of Buhari in 8 years will be better than the best of PDP in 16 years.PDP had 16 years with oil prices very high in-between yet they left us without light (power), without water, without roads, without security, without paying even salaries, indeed without anything. Whatever is happening today has its root from that regime. This administration came with bail out for states to pay salaries with the price of oil falling drastically. Tackled security and all that and somebody is telling me I should reconsider the past leaders that brought us into this mess. God forbid.I support Buhari and pray for him. I sincerely don’t care what people like those empty men who make ignorant videos have to say. I don’t want to be a Governor under a corrupt President. At least I can say that the person of Buhari is not corrupt. Let them call on their gods, let me call on my God and let the God that answereth by fire, let Him be God

Who cares? When I decided to be an actor, nobody supported me. They could not understand why a man who made a second class upper division in Business Administration in UNN and was wanted to be an assistant Lecturer, could opt to be an Actor. But my God was with me and I succeeded. Today, I have decided to go this political line and I guarantee you I will succeed irrespective of what unfortunate ignorant men will say. By the grace of God, watch me and watch where I am going. Onu kwuru njo ga emeche kwue mma

Aging Single Ladies: Juliet Ibrahim Is Holding Brief For You