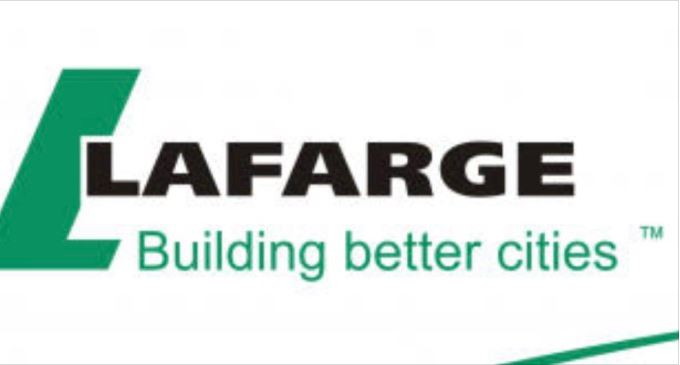 Unless the Lagos State Environmental Protection Agency (LASEPA) swiftly rises to curtail the activities of Bar Beach Plant of Lafarge WAPCO Plc, the already endangered lives of residents of Victoria Island, especially those living in Noga Estate and Tiamiyu Savage axis, are on the brink of being cut short by terminal illnesses.

As it stands, the long-standing peaceful relationship between Lafarge Cement and its host community of Bar Beach, Victoria Island is about to be threatened by complaints about dust pollution and the company’s insensitivity. It beggars belief that Lagos State Government, in spite of spirited appeals has not been able to do anything to stem the sustained and rising tide of environmental poisoning of the area by the cement giant, in desperate pursuit of profit.

A visit to the Noga Estate, whose residents are worst hit, revealed a people consistently plagued with clouds of dust and smoke hovering in the mid-sky. The thick particles often settle on their roofs, find their way inside their houses and cover up their personal items left in the open. Washed clothes spread outside to dry are quickly dirtied and discoloured by emissions from the plant.

In a separate assessment of the health and environmental challenges of the cement company’s activities on residents of Noga, a resident noted the rising of dust during blasting and haulage has contributed to the poor state of the environment. “It is a pathetic experience for me and my family. On advice, I have to resort to giving my children palm and milk to curb the effects of the poisoned dust they inhale on a daily basis. I don’t know if it works but a doctor friend advised me to. In fact, he has counseled me to leave the environment because symptoms of inhaling such dust only manifest when one is advancing in age.”

In another corroborating narrative, a resident who is an expert in Health, Safety, and Environment (HSE) indicts Lafarge for its nonchalant attitude to the heath of its host community. According to him, “Silica exposure is a hazard which has remained a serious threat to many workers and residents, including sandblasters, stone crushers, those involved in drilling, quarrying, and tunneling through the earth crust.

“Diseases associated with the inhalation of silica-containing dust include silicosis, chronic airways obstruction and bronchitis, tuberculosis and lung cancer. Many workers, including those in high-risk settings, are exposed to crystalline silica. Wetting of the site road with water is carried out to reduce only the fugitive dust.

Empirical observation reveals that while most of the workers are protected, the residents in the area are exposed to the dust during the production process. Some of the people we spoke to reported prevalence of asthma, while some others reported exposure to heart diseases. Besides this, the level of vibration and noise by earthmovers at quarries are supposed to be kept under control at least to fall within the limit allowed by the Federal Environmental Protection Agency (FEPA). These factors are monitored using vibrogram while keeping the vibration level at less than 50 mm per second and the noise at below 120 dB (decibel).

All efforts to get the management of Lafarge proved abortive, as calls to the corporate affairs department were neither answered nor returned.

Related Topics:Agent of Death! Who Will Save Victoria Island Residents From Lafarge’s Poisonous Production Activities?Lafargeslideshow
Up Next