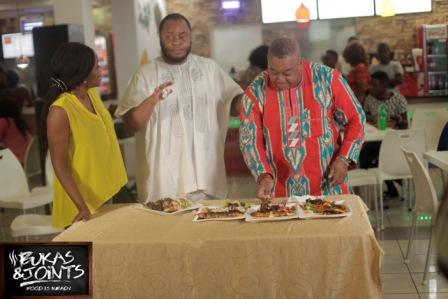 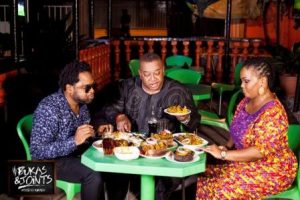 The third season of Biola Alabi Media’s Bukas and Joints is here. The thrilling travel docu-series Bukas and Joints premieres on Sunday, February 5.
As usual, expect a tantalizingly and rejuvenated new season of Africa’s number 1 food-travel show on A.I.T. at 7:00 pm in Nigeria.
The past two seasons of Bukas and Joints left audiences licking their lips in anticipation and salivating at mouthwatering African dishes.

According to producers, “this third season promises to be a sensational hit with even more locations, even more variety of cuisines and more businesses determined to take African cuisine to the next level. Season 3 will definitely have audiences clamoring for more.”

Olisa Adibua, our show’s delightful host returns again this season and this time around he is taking on street food and local joints within our African borders, sharing the uniqueness of authentic African cuisine. The show encourages our audience to explore the wide range and diversity of the African cuisine; you are never too far from Bukas & Joints certified local spot.

“Here at Biola Alabi Media, we are committed to telling authentic African stories and showcasing the richness of Africa’s cultural heritage to the world” said Biola Alabi, the creator and executive producer of the show.

She also explains that the new season will have a wider reach than the first two seasons. “The third season of Bukas and Joints is expanding its reach by exploring African cuisine within Africa. There are a lot of untold stories behind the evolution of our cuisines over time, and we are looking to share these stories and the imprints our cuisines have made over different cultures,” Alabi says.

She also thanked partners and sponsors of the show for their support and commitment. This season’s sponsors are Heritage Bank and Grand Cereals makers of Grand Pure Soya Oil and Kilamanjaro Restaurant.

Viewers are urged to join Olisa and his celebrity guests including Seyi Shay, Cohbams Asuquo, Osas Ajibade and many others at 7:00 pm on A.I.T.

Follow our story via social media (@bukasandjoints) as Olisa continues his exhilarating journey of unraveling the mysteries behind our traditional cuisines, the unconditional ties that keep us connected to our cultural heritage.

Biola Alabi, the show’s creator and executive producer, oversaw the production of some of the most successful shows in Africa like Big Brother Africa, Face of Africa and the first ever Africa Magic Viewer’s Choice Awards, while serving as the managing director of MNET Africa.

What’s New This Season
We are happy to announce that this season’s features the debut of our brand new original theme song!
This season we’ve expanded our horizons and have filmed in two new locations; the Coal City of Enugu and the Federal Capital Territory of Abuja.
We have also extended our episode count to 15 episodes. Bringing the total number of Bukas and Joints episodes to an impressive 42!
About Biola Alabi Media:
Biola Alabi Media is a Strategic Consultancy and Content Creator, with Expertise in developing and amortizing pay entertainment, digital television, interactive television and emerging entertainment distribution platforms; we service governments, content creators, the telecommunication industry, and investors in the converging media technology space. We provide businesses and organizations with, short and long term, access to highly qualified industry professionals who are well versed in best practice processes, and can lend their extensive expertise to clients in the Broadcast, Telecommunications and Digital industries across a spectrum of subjects.
For Press Enquiries; please contact info@biolaalabimedia.com
Post Views: 494