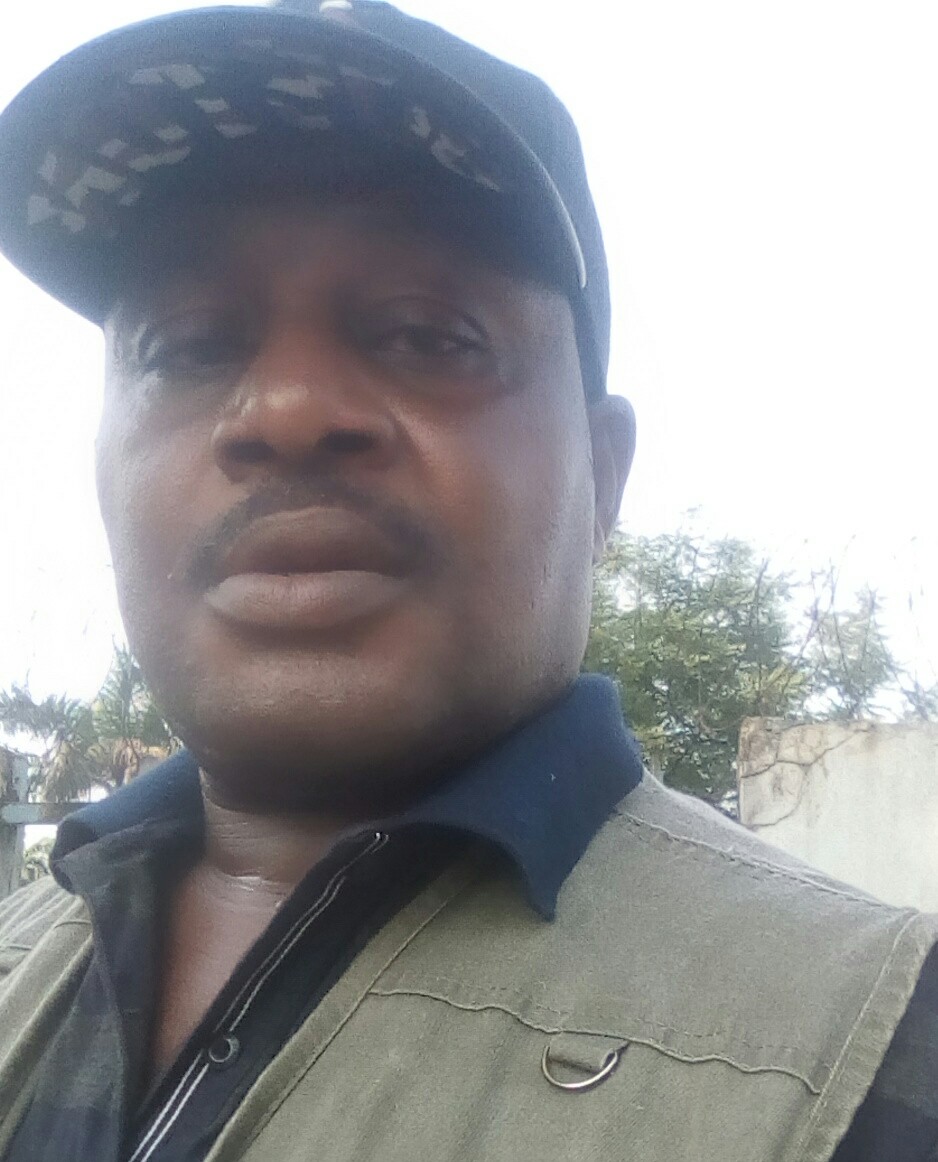 Biodun Abbey is in charge of events, management and business development at the National Theater, Iganmu, Lagos. He is also the Artistic Director of the Abuja Carnival. In this interview with www.theoctopusnews.com, he talks about his love for Theater.

Your passion for theatre is awesome, how did you find it or did it locate you?
Actually, I trained as a Theatre Artiste. I went to University of Ilorin for my first degree and University of Ibadan for my Masters in Theatre Arts with bias for set design – that is technical directing. For my first degree I did play directing. My service in 1988 fetched me a National Award as the best youth corper that served. That gave me this job, it was an automatic job. I started working at the National Theatre after my service.

At some point, you were in charge of the National Troupe, was that luck or fate?
When Hubert Ogunde died in 1990, I was barely one year in service and the government said that I should go and start handling the National Troupe as a director in acting capacity. That is how it all started.

How did you manage such a huge responsibility with little experience as at that time?
I trained and besides the training in the University the talent was there too. I did not go to school to read theater by accident, but by design. When I was growing up as a small boy, the thing that gave me joy those days was going to the cinema to watch the few movies that were produced at that time. When “Kadara” was produced I watched it, I watched “Dinner With The Devil” with Wole Amen and the rest of them. I was always following the late Olushola Ishola Ogunsola popular as Isho Pepper then in Ibadan because I was born and bred in Ibadan. Then, he would carry me on his shoulder to Obisesan Hall in Ibadan to go and watch stage plays. I grew up knowing that world, the theatre world. So, the interest has been there. It is not like I didn’t have anything to do, hence I did theatre. I did theatre because I wanted to do it. When my colleagues were talking Law and International Relations, Engineering and Medicine, I was talking Theatre and it pays off. I have no regret.

A lot of people will disagree with you that studying theatre pays off as compared to Law or Medicine.
I can say that because for most of us what theatre has not been able to satisfy is our greed, maybe their greed, not mine. But the basic needs theatre has been able to satisfy them. You want to drive a good car you can buy it, you have a roof over your head that is not a rented apartment, and you have children that you send to school without borrowing money. Those are the basic necessities. What more do you need? Theatre is taking care of my needs. Maybe, it’s their greed that it is not satisfying. It is also about packaging because if you think that it is just play that you are doing then they treat you as just a fun person, but when you see your business as business they will give you respect. Since I entered the scene, I have always seen it as business and it is either you are able to pay my money or you leave me alone. To me, an artiste is a parent, he is a husband and he is someone who has responsibilities. So, you can’t just say after all he is an artiste. No, I am a worker, I am a businessman and I deserve to be paid for my sweat. I also don’t compromise quality, so if you are ready for what I am offering then you should be able to pay my dough. After all, when I emerged the best youth corper several doctors served, several engineers served. I, a theatre artiste served and I emerged the best youth corper because I was able to impart.

What are you bold to say about theatre?
Since I graduated, plays that made waves in this country have had my signature, even films.

Can you mention some of these films?
I am talking about films such as “Sango”, “Oduduwa” and “Agbako”. All those films which at one time or the other made waves in the country had my signature. If you want to talk about stage productions you will talk about “Langbodo”. Any major play that had ever climbed the stage of Nigeria had my signature. I make bold to say that I am about the only member of International Body of Scenographers, (OISTAT), in this country. If you goggle OISTAT you will see my name there. I am the only member that is there. Like I told you I have designed plays for the National Troupe of Nigeria, and even for individual groups.

Let’s talk about Sango, what specifically was your role in the production?
Sango was produced by Femi Lasode Films. I created all those sceneries you saw in the movie. And that was the first major leap in the industry instead of using all those ready set. A situation where you see people dressing set and not creating sets. As a matter of fact, I had to clear bushes; I created Oyo Ile and Oyo Koro. I created the northern town that was in the movie. I created Owu. So, you can imagine when a producer says I want everything original and all I needed to do was go and do my research and know what scenes they had there. The kind of clothes they wear and things like that. The result you saw was a product of serious research. I just packed my things and went into the villages. In designing Songo I didn’t just stay in Lagos and say we can create what we need here. I went as far as Jebba. As a matter of fact, for the northern town I created in the movie I used Gagoronjo in Ilorin, a suburb, one bush in the suburb, it was a Fulani settlement. That is where I used for Nupe. I went as far as Jeba for my Recce. So, I wasn’t just going to stay around Epe, what people do today is lazy. Lazy Scenographers just want the easy way out.

How would you describe the success of Sango as at that time?
When you say something is successful or not, I think that it is a relative word. I believe Sango was very successful. It was a huge success. As at that time, the kind of human traffic that the National Theatre witnessed when they screened Sango here was amazing. The human traffic when they screen Sango at Eko Hotel was awesome too. I think that Sango was a huge success and it was a radical departure from the status quo. It was a departure from the way it used to be done. Femi Lasode was out to break new grounds and he did break new grounds. And all of us that were working on that project were going to do something different from what people had being doing. It is like that with me. Sango was a great hit and Oduduwa followed suit. When I needed to created Mecca in Oduduwa I travelled to as far as Jos where I got the right topography for what I wanted. For you to create you have to consider a lot of factors and when you don’t you are just a joker as a Scenographer. As a set designer or Scenographer, as the case may be, you are as good as a director. As a matter of fact, when you read your script you first have to first read as a director before reading as a Scenographer because whether you like it or not every fantastic designer is a frustrated director.

What killed the once vibrant theatre culture in Nigeria?
Several factors could be responsible. There is recession and financial challenges and so people can hardly go to the theatre to watch movies anymore. Another factor is the home video which came and started competing with theatre and because of the introduction of technology which made such production look magical most people appear mesmerised by it.

Can the situation still be salvaged?
Today, we have exhausted all of the antics and technology of the home video, people are more sophisticated and they want to watch what is original and they are going back to the theatre. We had a show yesterday and it attracted a huge crowd. There were films in two halls, there were stage plays in two halls and the stage plays attracted more crowd than the films. That is to tell you that we are back to the theatre. And It is not just the conventional theatre alone. The main thing that happens in the church today is the theatre. Every church has a theatre group; they have a stage, light and sound. They push away their altar for their stage to accommodate a stage play. Theatre itself started from the church, but suddenly they saw it as something that must be banned in the churches, saying it’s the devil’s handiwork, but today it has returned to churches.

How successful has the Abuja Carnival been?
The last edition of the Abuja Carnival was very successful. Well, we didn’t have all the states of the federation participating. I think we had about 22 or 23 states participating. For me, that is a pass mark considering the economy. So many states got approval to be there, but no cash backing. But all the activities that we had during the carnival came out in Gold. The states that participated came with enthusiasm; the content too was very rich. The event was very a colourful carnival because for me it was about colours. Carnivals thrive on aesthetics and colours and we achieved that a lot. You know that Abuja Carnival started in 2005, we missed only 2015 and that’s because the misters and other teams were just appointed after the change of baton. I think they were appointed a week to the event. We decided to postpone and postponement turned out to be cancellation.