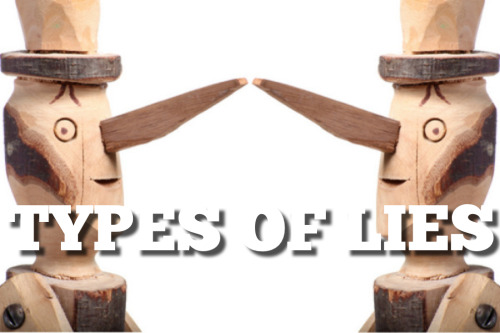 This is often believed as the least serious kind of lie. These type of lies are told to avoid burdening an individual with the weight of the truth. An example is showing appreciation for an undesirable gift. These lies are indeed quite harmless but the problem is over time the white liar loses credibility and is dismissed as an insincere person.

These lies are common with children, but when an adult does it, it’s just plain annoying. In a bold-faced lie, the liar says something everyone knows is false but stands by it as the truth (regardless of how obvious the lie is). People tend to be resentful of bold-faced lies because of how belittling of time and intelligence it is.

Here the truth is usually mixed with untruth to make the liar look impressive to others. The funny part is the exaggerator will sometimes weave truth and lies in a way that confuses even themselves. Unfortunately, at some point the exaggerator begins to believe these lies that no one else might even believe. It’s truly tragic.

This might seem like tautology but it isn’t. A deceptive lie is one where the deceiver creates a false impression with truth, either by not telling all the facts or recounting the facts in a misleading way. It’s quite impressive actually and unfortunately people tend to believe these lies. These lies are subtle, yet powerful, hurtful and even deadly.

These lies are either caused by low self-esteem or the need for attention. Compulsive liars tell lies even when telling the truth will be easier and better; what matters most to them is the attention the lies will give them. It’s quite ridiculous and at the same time extremely tragic. Compulsive liars typically find it difficult to stop lying as it is more of an addiction for them.

This involves presenting something you are not sure of, as the truth. Gossip blogs are fond of this. These lies are very hurtful and damaging, they typically lead to rumours that put others in danger or damage the reputation of others. Gossips and rumour mongers are the people typically associated with these lies.

These lies are typical of people who break spoken promises and commitments. Duplicitous liars typically hide their true feelings and intentions behind false actions and words. These liars cause great damage to others. Unfortunately, they are quite difficult to identify until they’ve disappointed. One way to protect yourself is to try to speak to people who have previously known the person to know if the person is generally associated with broken promises and commitments, so you can be careful.

Related Topics:7 Types of lies people tellslideshow
Up Next

Important Mindsets you need to succeed