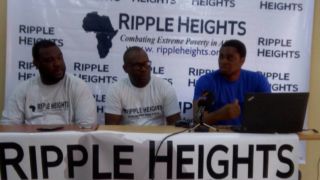 A Non-Governmental Organisation, Ripple Heights is giving succor to communities in Lagos State that lack portable water. The organization established eight months ago in the United Kingdom is saddled with the aim of combating extreme poverty in Africa.

Under its three-plan fold which are Water Is Life project, Go-Agro Initiative and Slum To League.

Through the water is life project, boreholes will be sink to communities who did not have access to good water. The goal-Agro is designed to improve agriculture in Africa, while the Slum to League is based on sporting sporting sector

The organization made up of Nigerian professionals based in the United Kingdom, Nigeria and other countries across the world, are passionate on making life better for people of Africa.

Starting from their homeland, Nigeria, the co-founders, Henry Agho and Chiedu Uwaechia stated that with the partnership of Lagos State government, they have earmarked Ibeju-Lekki, Badagry, Iya-Agbe and Ikorodu communities to sink boreholes there.

Speaking in a media brief at weekend in Lagos, Mr. Uwuaechia, a London-based IT Professional said that they met with the Lagos ministry of Rural development and got their willingness to support their vision. “Ripple Heights is a NGO that was borne out of passion to make life better for our people. Under the Water Is Life projects, we are providing portable drinking water to where it is non-existent because we know how lack of clean water can result in outbreak of diseases like cholera. I lived in Lagos before and with the partnership of Lagos State commissioner for Rural Development, four communities will get portable water starting from Ibeju-Lekki where our team of engineers and workers will go and begin work on Monday (today). We are also sinking another in an Ethiopian community at a later date this year”, says Uwaechia.

Mr Henry Agho, a security consultant also added they are supporting an amateur club, Seaside FC in Lagos with sporting kits and secure sponsorship for the team and also plan to enhance skills of craftsmen occasioned by their visit to cane village in Mende-Maryland.  “With our three-fold plan, we believe, people can live better lives, enhance their entrepreneurial skills and open up windows of opportunity for the African man and woman to excel in every endeavours”, says Agho.

He concluded that “presently we are funding with our own funds, we expect support from others as time progresses”.
Post Views: 1,051

Signs of a fake friend