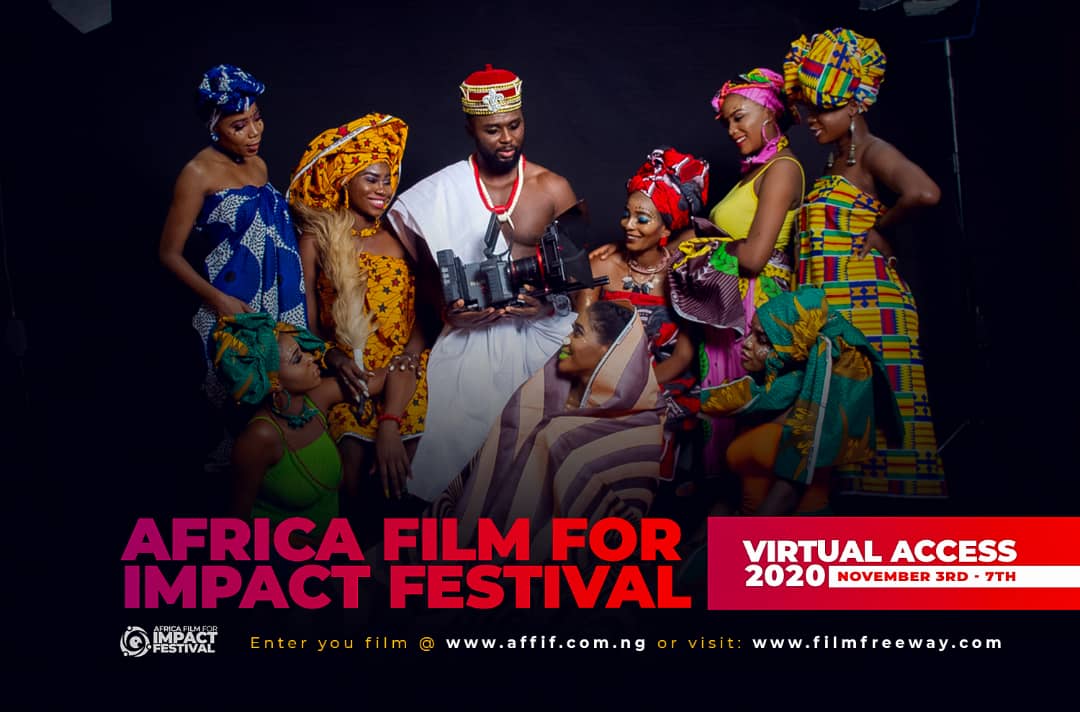 All is now set for the 2020 Africa Film For Impact Festival (AFFIF) and Awards. The highly anticipated event is billed to start tomorrow, November 3 – 7, 2020 via virtual access.

With over 10,000 film entries, 128 films made the official selection to screen at the festival and the award ceremony that will also feature some of Africa’s finest filmmakers who will be hosting a masterclass on different aspects of filmmaking.

With the theme “Break The Cycle” AFFIF, in partnership with High Definition Film Studio, 5 films; ‘State of Emergency’ Nov 3 at 7PM,
‘Unlawful’ -Nov 4 at 7MP;
‘Where Is Nana’ -Nov 5 at 4PM;
‘The Manifesto’ -Nov 5 at 7PM;
‘Brutal Cycle’ -Nov 6 at 4PM; will all be premiered at the festival.
‘Ghetto Child’ by Anja Celine and ‘From Trash To Treasure by Lara Lee, will be heralding the award festival.

Among the lecture series, University of Cape Town’s Centre for Film and Media Studies, South Africa, will be tutoring established and upcoming male and female producers, directors, writers, actors who are passionate about impactful films, with much focus on directing, cinematography, screenwriting and acting.
Also African Women in Film and TV Empowerment Program (AWIFTEP), a program supporting the development of African women entrepreneurs within the film and TV industry has indicated interest in partnering with AFFIF 2020.

AWIFTEP’s reach that extends across Africa where promoting women’s economic empowerment is a principal priority and will be a great asset to aspiring filmmakers. The body among others will be holding virtually facilitated sessions with industry experts covering all relevant topics on film for impact. They will also help African Women in Film and TV become key industry players through networking, capacity building, mentorship and access to funding.
With panel sessions on different engaging topics like; Film As A Tool for Social Change, Women Empowerment & Gender Based Violence, Human Trafficking, Building Accountable Leaders & Systems for a Corruption Free Society, Intellectual Property Right & Plagiarism, Human Right & Police Brutality and Masterclasses in Directing, Cinematography, Scriptwriting & Acting, AFFIF will surely determine the future of filmmaking in Nigeria and Africa at large.

Award category at AFFIF 2020 includes; Screenplay, Cinematography and Creativity (Director) while, stakeholders in both filmmaking and the social change sector are a major audience for the virtual festival.
The President of High Definition Film Academy, CEO of High Definition Film Studio, Founder and Executive Director of Film For Impact Foundation & Fellowship, pioneer of Script2Screen Africa Reality TV project and Festival Director of Africa Film For Impact Festival (AFFIF), Bright Wonder Obasi, said; “Film For Impact Festival is dedicated to showcasing, celebrating, and empowering films and filmmakers committed to social change themes in movie production across the continent of Africa and the world.
He said; viewers can subscribe to the festival Youtube channel @FFIF TV so they can get notified of upcoming events. They can also follow Africa Film For Impact Festival on Instagram, Facebook, and twitter @affif.ng and @filmforimpactng. Only registered persons can join the masterclasses on zoom and access film screenings.
The versatile and talented filmmaker also said the official website of AFFIF remains www.affif.com.ng and email affif.com.ng@gmail.com.
“Aside all the lectures, series and films screenings, AFFIF will cap it up with an Impact Award ceremony, which will honor extraordinary achievements in filmmaking and driving social change through films.”

Related Topics:'AWIFTEP2020 Africa Film For Impact Festival (AFFIF) and Awards Kicks Off NOV 3AFFIF 2020
Up Next

Lekki Massacre: I Have Never Been Bribed By Any Government, Omotola Claims

Remember When You Could Not Put Food On The Table, Georgina Onuoha Tells Desmond Elliot