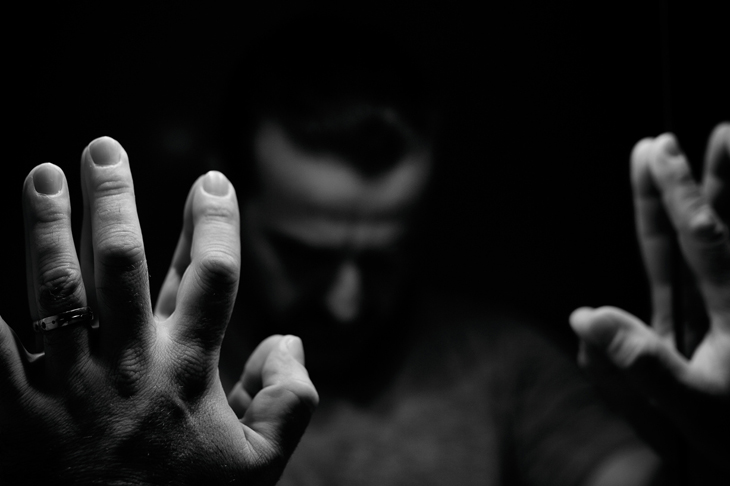 “My depression is worse than ever.”

Sipping my Americano, I nod in response to my friend and then open and close my palm in a gesture to say “Tell me more.”

A few years earlier he went through a dark time when a drunk driver hit his motorcycle and he lost a leg. Not long after, his wife of two months filed for an annulment. We’ve often talked through his depression and lifelong struggle with it, but this time the situation was different. He’d recovered from the loss of his leg and was in a healthy spot with his new girlfriend.

“Well, my day begins early enough and I’m ready to tackle the things I need to. I have a break between clients most days, so I tell myself I’ll use the time to accomplish what I need to get done for work, my relationships, and life in general. Chores, bills, you know.” Trailing off he bites down on his breakfast taco, then wipes the edge of his mouth.

“Anyway, I do none of it. I’ll sleep, or I’ll put on Netflix and zone out. Then I run late for appointments and I’m pissed at myself for not doing what I need to. At night it’s the same story — more Netflix and apathy. Then I begin to feel indifferent and hate myself that I feel so numb to my circumstances. From there, I spiral. It gets harder to get out of bed every day. I don’t go to the gym. I don’t practice my spiritual disciplines. I hate myself for it, but I also have little zest for life and I grow increasingly depressed, isolating myself from others and believing this is how it will be forever. I have no idea how to break out of it, and my pills don’t seem to help.”

Whistling low through my teeth, I slurp my drink once more then smile. “Well the good news is it’s not quite depression.”

The disbelief on my friend’s face is clear. He’s spent most of his life battling depression. But I hold up my hand before he can object: “You’re dealing with depression’s twin cousin. It’s called acedia.”

Acedia (pronounced ah-SEED-e-uh) is an old term coined by monks who lived in the desert during the fourth century. Before the Seven Deadly Sins became known to the world, the early Desert Fathers had a list of “Eight Bad Thoughts.” One of the most severe thoughts was that of acedia, which the church eventually rolled up under the sin of “sloth” when the seven sins became commonplace.

One would think “lust” would be the one they hammered on given the religious leanings of the modern church, but it was considered one of the most minor “bad thoughts.” The monks viewed lust as a lower form of greed in that you desired something you didn’t have. Acedia was one of the most severe and deadly thoughts because of the despair and absolute disdain for life it produced in a human being. It’s a shame the word has been lost to ancient textbooks and is no longer used, because acedia’s connotations carry far more weight in today’s cultural environment.

I first learned the term when I read author Kathleen Norris’s book, Acedia & me: A Marriage, Monks, and a Writer’s Life. In the book she quotes a monk who states:

“The demon of acedia — also called the noonday demon — is the one that causes the most serious trouble of all…He makes it seem that the sun barely moves, if at all, and…he instills in the heart of the monk a hatred for the place, a hatred for his very life itself.”

Many of the desert monks found themselves in the same place as my friend. Work in the morning, but by noon, they despised the repetitive nature of chores or work. After some time in this condition, they felt little zeal for life. Prayer stopped, sleeping increased, and they felt numb. Eventually, they despised life itself as they spiraled into a dark hole.

This condition can even begin due to traumatic events in one’s life. Norris — no stranger to suffering and pain — tragically lost her husband, but instead of spiraling into depression, she found herself battling acedia. In an interviewregarding her struggle after her husbands death she explained:

“There were so many days when I woke up indifferent to everything, especially when my husband died…When he was alive, the care-giving had to be done so I couldn’t be indifferent. But I think one of the worst phases — and I don’t want to malign the show because it was kind of entertaining — was when I watched an entire season of America’s Next Top Model. In one sitting.”

Reading through the book, I nodded along and remembered times when I thought I’d been depressed only to discover I’d been battling its twin cousin. That old feeling of indifference and apathy leading to a numbness, only to spiral further out of control and despise being alive.

When I started researching depression for a book I was writing, our organization surveyed five hundred men and women. When we compiled their answers, many of them explained the exact symptoms of acedia. Because depression is complex and we use one word to lump several aspects together, the healing process can become confusing. It’s like the word “love” in effect. While I love my wife, I also love breakfast tacos. But I certainly don’t “love” the two the same way. That morning over coffee, I explained to my friend that due to the way depression and acedia intertwine, he could be dealing with both at the same time.

“The good news and bad news, however,” I told him, “is acedia is a condition you can fight, but fighting it can also be mundane and feel as if you’re getting nowhere.”

I’m willing to bet if I asked each person reading this, “What things are you constantly putting off and why don’t you want to do them?” everyone would have an answer. In our day-to-day lives vain repetition sounds terrible and we hate doing it. For instance, if I told you I needed you to stuff 2,000 envelopes with letters, then handwrite the names and different addresses on them, you’d say it was torture, right? We put off things like prayer though we’re certain it will enrich our spiritual life. We put off doing the dishes or laundry even though we know we need clean dishes to eat on and clothes to wear.

After I gave my friend a copy of the book Acedia & Me for him to read, he called me one evening to say, “MY GOD! IT’S LIKE I’M READING MY LIFE ON PAPER!” He found that even in his romantic relationships acedia had covertly snuck in. While finding romance and a significant other is often on the forefront of many young singles’ minds, here’s something most people forget about staying together “for better or for worse”: it can — at times — feel like going through the motions. That romantic infatuation or ooey gooey feeling you once had, with time, will morph into a love of the will. Funny enough, every marriage that has stood the test of time will confirm “love is a choice and action, not just a feeling.”

So here’s the good news. Combating acedia has simple steps that can help you act and combat the feelings of indifference, self-hate, apathy, and keep you from spiraling further. The bad news is that it begins by choosing to take part in little things that may seem repetitive, but make a big difference.

When HeartSupport surveyed our 500 respondents battling through depression, we asked a simple question: “What things have helped you cope and battle your depression?” Here’s what their answers revealed — most of the activities that helped were repetitive tasks that could be done daily or weekly. Things like serving within their community, writing, journaling, yoga, exercise, cleaning, or several other mundane or repetitive activities.

What the desert monks found in their battle with acedia was the same. They found joy after they had completed tasks at work even though sometimes the drudgery seemed insurmountable. By pushing through and praying — even in short bouts — they were glad they did. For everyone in this life, discipline often becomes the defining fire by which things like talent or goals become an actual ability. It is indifference and believing it will always be this way that keeps us stuck. You may be tempted to think, “this is just another way to call depression something else” but consider that there’s always been a power in naming things or knowing your enemy to fight them.

For instance, in his epic, The Name of the Wind, author Patrick Rothfuss has his main character learn the name of the wind to command the element which in turn transforms him into a legendary wizard. In Harry Potter, knowing Voldemort’s name — and that he was Harry’s true enemy — gave Harry the power to defeat the evil magician. Perhaps the most quoted example comes from Sun Tzu’s The Art of War in which he states:

If you don’t know what you’re fighting, then you can’t expect there to be progress. But if you do? There’s a good chance that some forward momentum, no matter how small, might be the crest of the tide that begins to break the chains.

So if your enemy’s name is acedia, then you know what to do.

This post is adapted from our new book Dwarf Planet: A Practical Guide Through Depressionwritten by Benjamin Sledge. If you’d like to purchase the book or find

Related Topics:DepressionslideshowYou Might Not Actually Be Struggling With Depression
Up Next

“Predicting the Stock Market Is Easier Than You Think”

Did Teni the entertainer lie to us?