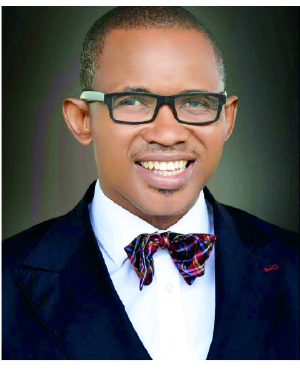 Call fair-complexioned and cerebral legal practitioner, Kayode Ajulo, a child of destiny and you won’t be wrong.

Growing under the care of a father who ran a bookshop and a seamstress mother, he was exposed to a lot of great people in the legal profession.

As little as he was, he admired these individuals, took them as his role models just as he vowed to also become a noble personality in the society when he grew.

Fate has been good to Ajulo, as he is today not just making great exploits in the legal world but also contributing to the growth of the nation.

Aside sitting atop one of the most flourishing law chambers with unarguably the most the preferred ambiance in Abuja, he has risen to become the national scribe of the ruling party in the country, just as he’s at various times been saddled with national assignments.

As far as humanitarian work is concerned, the activist, through his foundation, Egalitarian Mission Africa, has protected the rights of a lot of people across Africa endearing him to many especially in his home state of Ondo State, where he’s regarded as ambassador.

Rumoured to be gunning for the Senate in the last election, he contributed his quota to President Muhammadu Buhari’s re-election bid by being the engine room of a high ranking Buhari support group, Forward With Buhari.

Presently, Ajulo is said to be under pressure from All Progressive Congress (APC), party leaders to contest the 2020 gubernatorial election, owing to his high wired connection.

However, his associates maintain that his priority, for now, is taking his legal practice to the next level before any call to service.

The Other Side Of Donald Duke

GRADUATES OF UNIVERSITY OF IBADAN, DEPARTMENT OF STATISTICS TO HOLD FIRST HOME COMING/REUNION AND HALL OF FAME LAUNCH