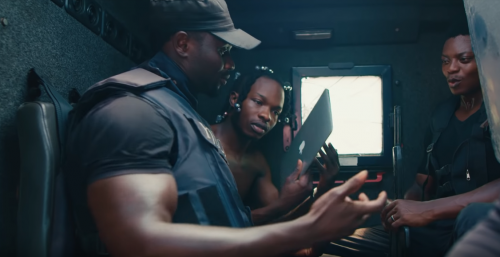 A source at the Economic and Financial Crimes Commission (EFCC), has revealed why the agency released Zlatan Ibile and Rahman Jago on administrative bail but held on to Naira Marley.

Zlatan Ibile, his personal assistant Rahman Jago and Zlatan’s house boy were released in the evening of Tuesday, May 14.

The trio were arrested along with Naira Marley after they were alleged to have been suspected for cyber fraud.

Explaining why Naira Marley is still in detention, our source explained that Zlatan Ibile was left off the hook because there was hardly any incriminating evidence linked to him. “His laptop was clean, he culpability was basically that he collaborated in a song that promoted cyber fraud, nobody will send you to jail for that,” the source said.

Further, he explained that on the part of Naira Marley, there was indeed incriminating evidence found both on his laptop and his phones, hence he is still being held for further investigations.

A statement by EFCC spokesperson Tony Orilade was quoted to have said: “There is overwhelming evidence against Naira Marley; so we can’t afford to release him on administrative bail like Zlatan and the three others.

“That Zlatan has been released does not mean they have been discharged and acquitted. Naira Marley is still in our custody and will be charged to court soon and we will make the charges known in an official statement soon.”

Recall that Naira Marley had been a subject of criticism following his attempt at promoting cyber fraud on social media.

In a social media post, he had tried to justify cyber fraud as the price for years of slavery and colonialism. His post, however, attracted mixed reactions with some people criticizing him while others implied that nobody was innocent of committing a crime.

He was however arrested on Friday, May 10 during an operation by the EFCC. His arrest was received with smiles by some people including Ruggedman who said during an interview that Naira Marley’s arrest would serve as a deterrent to others.