Wike made the statement while speaking at the inauguration of a road project in Etche Local Government Area (LGA) of Rivers State. 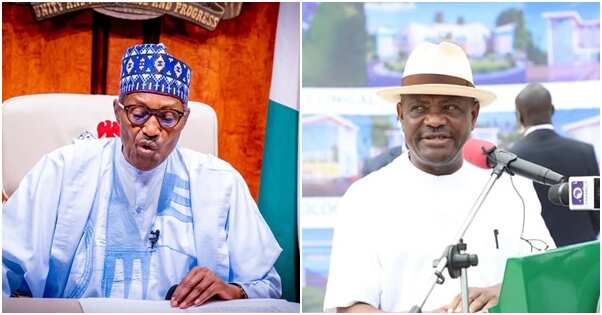 He says the APC administration had not performed well, accusing the president of shifting the responsibility of securing Nigerians to governors.

In a statement issued by Kelvin Ebiri, his spokesperson, the governor was also quoted as saying that the Buhari administration lacks the strategy to restore peace across the country.

Wike stated that some governors on the platform of the All Progressives Congress (APC), were in the habit of running to the presidential villa when they are supposed to stay in their states and attends to the needs of the people they govern.

He said: “Mr President should have come out openly and said, my APC governors, stop worrying me. Go back to your states and do your work. On that, I support him.

“Thank God, Mr President knows that I am not one of those that go to visit him over one problem or the other. I, as the governor of Rivers under PDP, you’ll never find me there.”

Wike said the federal government should admit that it can no longer fulfil promises made to Nigerians, and strive to lead the country out of its present challenges. He said Buhari is the commander-in-chief of the armed forces and is solely responsible for securing the country.

Meanwhile, a former spokesman to ex-president Goodluck Jonathan, Reuben Abati, has declared that President Muhammadu Buhari is in charge of the country contrary to speculations by some Nigerians.

Abati noted that after his interaction with Buhari during his interview with Arise TV on Thursday, June 10, he concluded that the president is in control. Abati, who was among the team that spoke to the president, said the interview proved that Buhari is in the know of things in the country.