Speaking after a rowdy session yesterday, Senator Akpabio, revealed that there was the need to constitute a new leadership in the Senate with the ruling All Progressive Congress (APC), being the majority party. 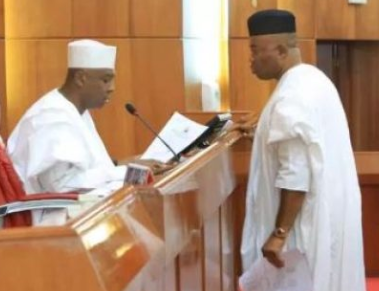 Akpabio’s position could not be isolated from a spat between him and the Senate President over Akpabio’s seating position.

The senate was thrown into a rowdy session after Saraki asked Akpabio to move to the seat allocated to him in the senate before he could make any contribution. This did not go down well with Akpabio who stated that Saraki embarrassed him by his comment. According to reports, Akpabio was still seating on the seat he was allocated when he was minority leader. APC and PDP senators for over 30 minutes engaged in war of words.

Speaking with journalists after the row had ended and the plenary was adjourned, Akpabio said APC is the majority party in the upper legislative chamber and there is a need to form a new leadership and asked Saraki to resign just like he did in August when he defected from PDP to APC.

“It’s a tradition all over the world that when you defect to another party even as a senate president like Saraki did, to resign from the office of the senate president. APC is still the majority party and they need to form a new leadership. The senate president should honourably resign just like I did.  I moved to APC in national interest. I don’t believe in bringing government into being and will not support that government to succeed. In the last 16 years, I did not see one kilometre of road done by PDP government in Akwa Ibom state, but today, APC government is constructing the road from Akwa Ibom to Calabar. The road has been a death trap and I must thank this government for that. From the national and local perspectives, people look at me as a leader and I must tell you that in 2019, it would be difficult for any other party to penetrate the south-south.” he said