The last has definitely not been heard of ‘This Is Nigeria’, a song by Nigerian artist, Falz.

Following that ban placed on the song, the rapper has gone to court to challenge the decision but the National Broadcasting Corporation (NBC).

The court documents were filed through Falz’s lawyers, Adepetun Caxton-Martins Agbor & Segun (ACAS-Law), on November, 6, 2018, three months after the NBC sent a letter to JODAJ Global Communications Limited in Jos sanctioning them for playing Falz’s song, “This Is Nigeria” and banning the song from being played on radio, along with other songs.

In the letter sent to JODAJ Global Communications Limited, NBC stated that the reason for banning This Is Nigeria is that the lyrics are vulgar and in contravention of the NBC Code. 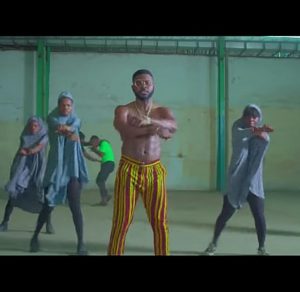 A lot of Nigerians, including celebrities, criticized NBC for the ban, stating it was ridiculous, but the ban was upheld.

Falz had hinted in an interview granted in August that he would write to the NBC to seek a justification for the ban and if necessary, seek legal redress in the courts. He has now followed through on his words by taking legal action against the regulatory body.

The singer, who is also a lawyer, has taken steps in engaging his lawyers, ACAS-Law, to institute an action against the NBC challenging the ban.

Confirming the disparity in funds available to both A-list acts and up and coming singers, the director who is known to have shot videos for most of Nigeria’s singing talents advised young artistes to learn to crawl before walking.

“You can shoot a good enough video, you don’t need so much, just be contented with what you have now. There is time to improve. That you have one song does not mean that it is the only single you are going to release; you can keep growing. When you look at the videos year after, it allows you to say that is where I am coming.

“As a baby, you crawl first, and then you learn to stand before you walk. So, what I have found out is that a lot of people want great stuff, but don’t have the budget to get those jobs done. So, what I usually advise most people is to try and agree on a simple concept, don’t try to make a video to compete with someone that is already up there or someone that is part of a big organisation. You need to understand that, and know your level.”

My Biggest Regret Is Leaving Nigeria-Sinzu

In 2012, he was one of the leading hard-core rappers Nigeria had. His song titled ‘Carolina’ featuring Davido was blasting on the playlist of almost every Disc Jockey, and then he left Nigeria for America.

Today, Sinzu more popular as Sauce Kid is trying to find his way back into the industry he left several years ago.

He revealed that one of his biggest regrets was leaving Nigeria for America, adding that his music would have been better off had he remained in the country.

“Am just learning to be more patient, learning to just stay the course, a lot of people believe and I believe if I had just stayed the course and not had to go back to America and get involve in certain things, I probably would be in a better position right now.”

The rapper, who spent two years in jail for aggravated identity theft said he has learnt from his mistakes.

Recall that as part of his comeback effort, Sinzu dropped an album titled ‘Better Late Than Never’ in November 2019.