Socialite, Shina Peller, has refuted claims that he is just a rich guy who loves to party.

Speaking during an exclusive interview with www.theoctopusnews.com, the brain behind Nigeria’s leading night club Quilox revealed that his night club is less than 10 percent of what he does.

The fair-complexioned man revealed that he works like every other person and it would be wrong to assume that because he has a club then he is not a serious element.

Also Read:  Ways to deal with a competitive friend

“There was a time I sold 10 of my trucks from my haulage business. I sold all of them in one day. I sold the trucks because I needed to finance the construction of the club because no bank was willing to identify with the business that was waiting to be tapped,” Peller said.

A man with serious business interest, Peller, has delved into politic where he hopes to help his people and not just shout from the sidelines. Unlike people who would sit and enjoy themselves knowing that they are comfortable, Peller, has the interest of his people at heart, what a man. 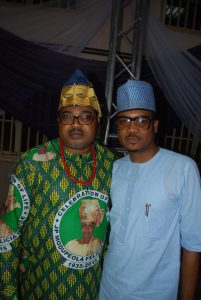 Chief Kenny and Shina Peller at an event

Segun Adebutu Shying Away From Philanthropy