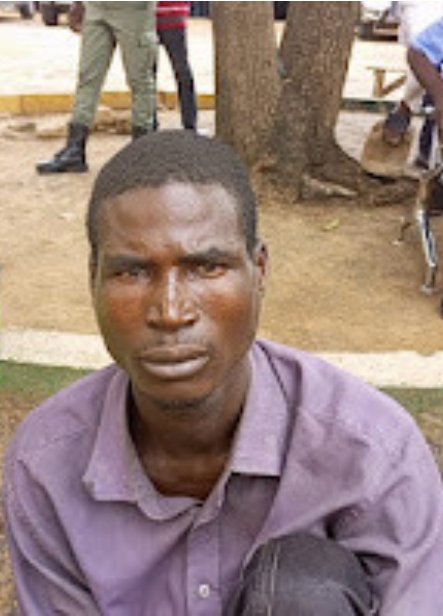 A man identified as Elisha Tari has explained why he killed two of his children.

Recall that the 25-year-old man was arrested by the Adamawa State Police Command for stoning two of his kids to death.

Tari who is an indigene of Himike village in Michika Local Government Area, was arrested last Thursday, August 18, for commiting the dastardly act.

On Monday, August 22, Tari was paraded before newsmen, and while fielding questions confessed to brutally murdering his victims.

Tari who is a traditional musician said, “I smoke indian hemp, drink alcohol and inhale snuff. I do not in any way take tramol or any other hard drugs,” he said.

TarI stated that his wife and the mother of the deceased children left her matrimonial home over two months ago, and that all efforts to make her return proved abortive.

According to him, he went to his in-laws on several occasions to persuade their daughter to return home, but his in-laws denied him access to his wife and instead kept on deceiving him.

He said the deceased children came to meet him on that fateful day while he was cooking and he asked them “When is your mother returning back home?”

Further, he said that he also asked them to say “God” but instead, they said ‘fire and kept saying fire, fire, instead of God.’

“I became irritated and provoked by their action as a result which I picked up stones and hit them on their heads to death,” Tari said.

He claimed he has a psychological problem, and was once tied with chains because of a mental disorder.