Erstwhile President of Nigeria, Goodluck Ebele Jonathan, has revealed that he has accepted an apology from Aminu Shagari, son of Shehu Shagari.

The apology accepted by Jonathan is in respect of his supporting President Muhammadu Buhari in the 2015 election.

Reacting to the apology posted on FaceBook by Shagari, Jonathan said  that he has no enemies to fight. He also urged Aminu to emulate his father who he described as one of the “most detribalized Nigerians”.

Jonathan said: “Thank you for your apology. However, I never took offence. My firm belief is that I am a pencil in the Hand of God. Therefore, I have no enemies to fight, because of my confidence that people can only do to me what God permits. I urge you to continue to emulate the humility of your father, the late President Shehu Shagari, a most detribalised Nigerian. May God bless you. GEJ.” 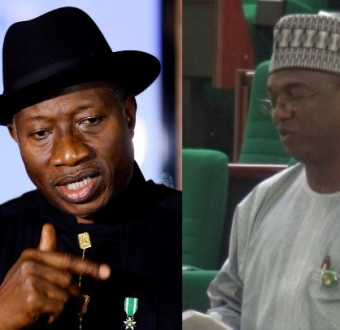 Shagari, a three-term House of Representatives member had recalled how he helped to ensure that President Muhammadu Buhari emerged victorious in the 2015 Presidential election even though he participated in a coup that took down his father’s (Shagari) government in 1983.

In the interview, the former President’s son accused President Buhari of not fulfilling his promise of immortalizing his father. He also recounted how he helped divide the People’s Democratic Party to bring down Jonathan’s government.

Recalling some of the things that allegedly occurred after his father’s death, Aminu said in the interview that;

“I was never contacted and the Presidency has not contacted our family, to the best of my knowledge. Nothing has changed; the only thing I remember is that, at a campaign rally in Bauchi, after his visit to our father’s residence in Sokoto, prayers were offered for my dad. This probably was an afterthought following the backlash that followed his (Buhari) mere signing of the condolence register, with no written or verbal condolence message.

“This is somebody we really supported, campaigned for and mobilised people for his election because we obediently adhered to our father’s dictate to forgive and let bygone be bygone. The same Muhammadu Buhari, in the condolence letter he gave the state governor (Aminu Waziri Tambuwal), promised to immortalise our dad. Close to two years after his death, he has yet to fulfil his promise. Whereas he recently named certain landmarks after some Nigerians who are still alive, including former President Goodluck Jonathan.

“Let me use this opportunity to tender a public apology to former President Jonathan and seek forgiveness because I helped to divide the Peoples Democratic Party and bring down his government, but, I have found out that what we thought about his stewardship was not entirely true. I expect President Buhari to also ask for forgiveness having found out that most of the things he accused my dad’s and President Jonathan’s administrations of are not true.”