Nigeria’s former president, Goodluck Ebele Jonathan, has revealed that some people’s loyalty can be worthless.

According to him, people who act like they can’t eat without you while you’re in a position of power will move on and act like you no longer exist, once you’re no longer in that position.

Jonathan stated this in Bauchi State while inaugurating the 6.25Km Sabon Kaura-Jos bypass road constructed by the Bauchi State government.

He commended Bauchi State Governor, Bala Mohammed, for standing by him even after he left office. 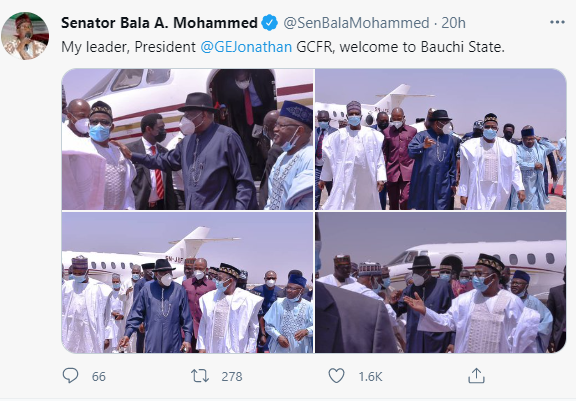 Goodluck Jonathan said: “It is not easy for somebody to work with you in Nigeria then, even after leaving office, that person still continues with that kind of strong relationship with you.

“I have been in government for a reasonable time, I have attained a number of levels starting from deputy governor and most of our experience is that after leaving office, some of the people you think that if they don’t see you will not eat, will just forget that you even exist.

“But this Senator Bala Mohammed, the governor of Bauchi state, is a good brother and he has invited me to inaugurate the first major project that he has completed. That is a big honour, and it is not the only inauguration, he even named the road after me as Goodluck Jonathan road.”

Meanwhile, the  Bauchi State governor has described Jonathan as his mentor who has made much impact in his life.

Related Topics:Bala MohammedGoodluck Ebele JonathanPeople Will Forget You Even Exist; Jonathan Speaks On Being Deserted By Allies
Up Next

See Why Another Of Governor David Umahi’s Aide Resigned