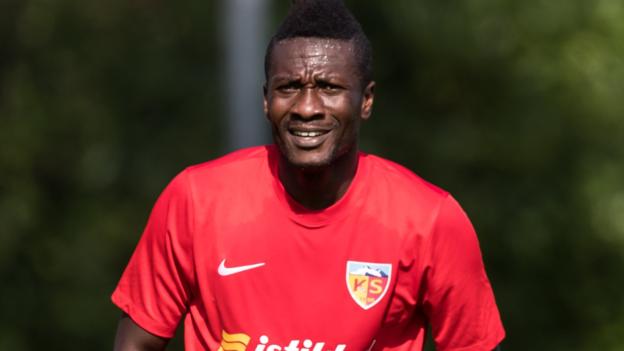 Asamoah Gyang has called it quits from international football.

The striker announced his retirement via his verified Twitter handle on Tuesday, May 21.

Gyang retired from national team football after he was refused the captain band to next months Africa Nations Cup.

Part of his statement read, “I cannot pretend to be happy. I would rather hurt myself emotionally and psychologically, over the years I served with an open heart and have given my all to the best of my ability in my quest to serving our great nation, Ghana. I have represented the proud colours of our country in 10 major tournaments from the Olympics, World Cups and in African Nations Cups with different coaches.

“In all, I would say the last years have been the proudest moments in my career as a captain under the managerial leadership of coach Akwasi Appiah. I stood solidly behind my coach during the difficult times in Brazil and in some cases supported the endeavours of the team financially when the need arose to make sure his tenure and my captaincy would not suffer challenges and to ride with the assertion, ” A Ghanaian coach can do it.

“My team, my family and fans have had reasons to whisper the trend of reportage and articles either to substantiate my exclusion or inclusion and again rumoured roles I am to play at the AFCON in Egypt. In all, my answers have been, “respect the decision of the coach because the records under the year per game minutes and goals for all attackers are evidence to guide his decision”.

“Upon consultation with my family and team, and as an active footballer and captain of the national team, if the decision of the coach is to give captaincy of the tournament to another player while I am named in the team of the tournament.

“I wish to recuse myself from the tournament. I also wish to retire from the national team permanently; not pretending my presence would not fuel the purported undermining the country has seen under my captaincy,” the statement read.

Theresa May To Step Down As Conservative Leader