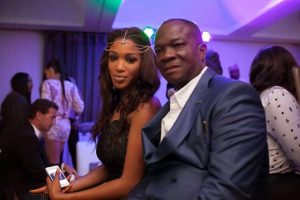 Prince Aku and his estranged wife, Dabota Lawson-Aku when the going was good

In the wake of her marital crisis with erstwhile husband Prince Sunny Aku, Dabota Lawson, was heavily criticised for having a baby which was not her husband’s.
During the ordeal, Prince Sunny Aku the brain behind luxury brand Novena Majesty Furniture, kept mute over the issue, as he opted to rather focus on his business.
While the rumour mill was agog, Dabota fueled it first denying the crisis in her marriage before eventually going full throttle to paint Prince Aku as an embodiment of fear and someone she could not reside with. Then, she went silent.
A year after, Lawson is back and this time her business is to rub more mud in the face of Prince Aku who seems to have moved on.
In a recent post shared by Lawson, she alleged that Prince Aku boasted that she had little money in her account and would soon return begging. However, God has compensated her, wiped her tears, and answered her prayer giving her a wonderful man and daughter.
Due to this post, many who have monitored the developments between Prince Aku and Lawson have asked what is the mother of one who has been silent all this while now up to?

What Caption Best Describes This Picture Of Gov. Ambode?