As the counting of results in the American Presidential election continues, Joe Biden, the presidential candidate of the Democratic Party has overtaken President Donald Trump in the state of Georgia.

Locked in a battle of who would lead on Thursday, November 5, with each candidate controlling about 49.4 percent of the vote, Biden has now taken the lead from Trump who initially had a slight lead.

As absentee ballots were counted early Friday, Biden pulled ahead with 917 more votes.

Flipping Georgia, a state last won by a Democrat in 1992, and where Trump won by more than 200,000 votes four years ago, would represent a significant political shift.

However, the state has shown signs of trending blue. When Trump defeated Hillary Clinton in 2016, he did so by only five percentage points, a far slimmer margin than Republicans enjoyed in previous presidential elections.

If Biden sustains the win, President Trump who needs Georgia to win will no longer have a pathway to claim victory in the presidential election.

The latest result is computed as follows; 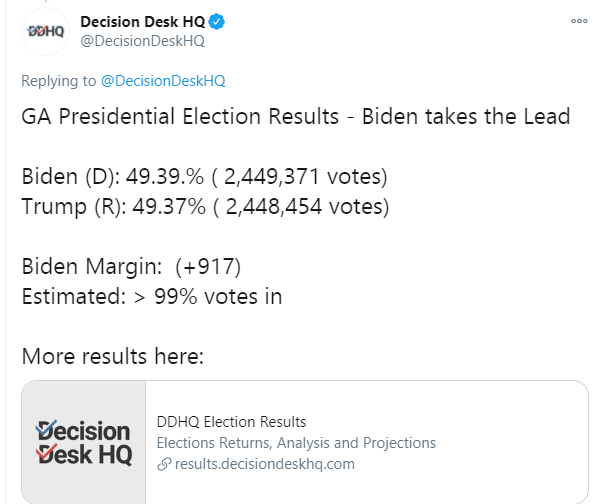 US 2020: We Will Be Declared Winners-Biden