The remains of former governor of Oyo State, Senator Abiola Ajimobi, has been laid to rest today.

Ajimobi was buried in accordance with Islamic rites with strict compliance with the COVID-19 protocols. 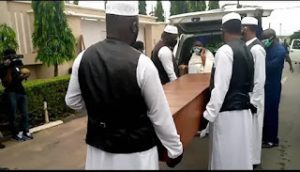 Present at the burial were less than 20 people, including the wife of the former governor, Chief Florence Ajimobi, and other members of his immediate family.

His Agodi GRA residence which was the Ajimobi family choice location for his burial was allegedly not approved by the Oyo State Government on the ground of litigation on the property, hence the delay in the burial.

He died as a result of multiple organ failure due to complications from COVID-19.

Party faithful and other loyalists of the late politician were barred from the scene of the burial.

At 12 noon, prayers would be held for him at the Senator Ishaq Abiola Ajimobi Mosque, Oke-Ado, Ibadan.