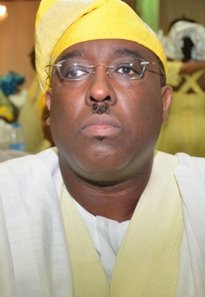 Not all failed dreams bring sad experiences. This is something which Tokunbo Sijuade has found out.

Once touted to be the next Ooni of Ife, that dream of the fine-faced Ife Prince never became a reality.

In fact, it was after he failed to emerge the Ooni of Ife that he went underground and people started wondering what he was up to.

However, for Prince Sijuade, going underground does not necessarily mean he has failed, as the man has been enjoying himself to the hilt though quietly.

Prince Sijuade is said to be the envy of a lot of people presently due to his jet lifestyle. Used to enjoying the good things of life, the man has not changed his old ways, as he has now upped his style and taste.

The dark-complexioned man’s frequent private jet trip has turned a major talking point among his friends and associates.

Shocker: Ooni Goof On Location Of Biblical Tower Of Babel***Claims It’s In Ife