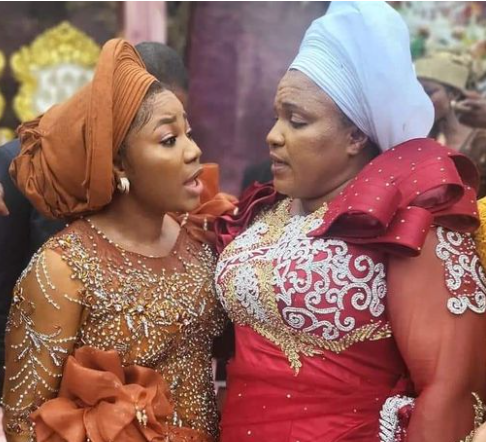 A critic of gospel artiste, Mercy Chinwo, has urged her to slow down on her social media show-off.

He made the call while stating that Chioma Jesus’s protege has been showing off and flaunting her marriage and the gifts her husband gives her on social media.

In a post shared on Facebook, the man with the name Obieze CIDP, said Mercy has been “almost all over the place” ever since she got married. He said Mercy is now infusing her husband’s name, Blessed, in her ministration and that she might soon start giving her husband ‘glory’ instead of God Almighty.”

She called on Chioma Jesus to call her protege to order.

”Dear Chioma Jesus, you’re Mercy Chinwo’s spiritual mother. I want you to advice her to slow down on the social media show off for now. I know she’s still new in the marriage lifestyle so the thing will be shacking her like pamy. She has been almost all over the place ever since she got married I understand that feeling too although I’m still single.

“So as a veteran and well experienced woman in the marriage and music lifestyle, Instigate her to slow down as it’s not everybody that is happy for her. Mama the truth is, with the way marriage dey sweet your daughter she fit go sing worldly album o. Hold her o. She’s too happy and it radiates all over her. Judging from her recent ministrations, you could see she’s now infusing her husband’s name. Make she no go share God’s glory with Pastor Blessed o . Na that kind thing dey make God vex o.

“I know she has posted the car her husband bought for her but please let her keep other upcoming gifts and blessings on low. The man will buy her house and other stuffs but let her not get too excited with vanity and forget ministry works. The aim is to lead souls to Christ through her singing prowess and grace and not show earthly achievements thereby drawing the attention of many doubters. I hope you understand. To us what she’s doing is good atleast they’re giving us content but then some people are feeling oppressed. If a Davido does what she’s doing it’s okay because he’s a secular artiste but a gospel minister doing it, hmmmm, the narrative will be twisted o. Make dem no say they’re flexing tithe and offering o. A wise is enough for the word ” 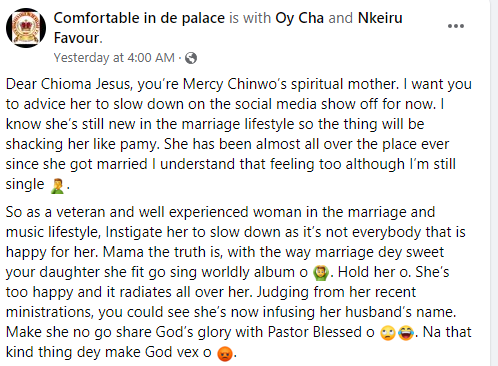