X3M artiste, Simisola, has expressed her disgust at people who want power and not responsibility, saying that they want the power, but not the responsibility.

Simisola who is also aptly called Simi revealed this in a social media post.

According to Simi, “I try very often not to say or think it too much, but being a Nigerian is so hard. It’s literally difficult. Lately, sometimes all I need to see is one pothole and i am just exhausted. And my frustration is mostly that everyone wants power, no one wants the responsibility.”

Simi is however not the first artiste to complain about the kind of people in power, as Falz also did same in his song titled “This Is Nigeria”. Following the release of the song, the artiste was heavily criticized by both religious bodies and government agencies. 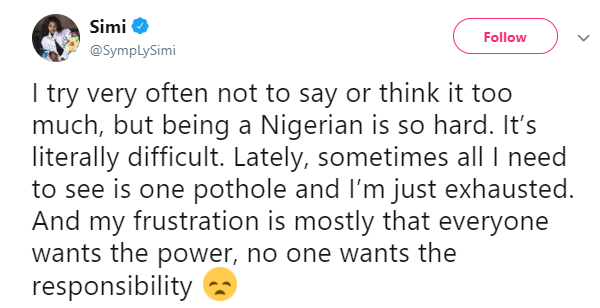 Wizkid: Dammy Krane Is Yet To Learn His Lesson

Why My Songs Will Be Relevant Forever-Patoranking