Omokri criticized the popular Muslim cleric for condemning Sheikh Khalid over his comment about the Buhari-led government.

The former presidential spokesperson made his position known while reacting to Gumi’s criticism of a now-viral sermon delivered by Shiekh Nuru Khalid, the former Chief Imam of Apo Legislative Quarters Mosque, Abuja.

Gumi had described Khalid’s sermon on insecurity as “worse than kidnappings.” Khalid had criticized Buhari’s government over its failure to tame the escalating insecurity and killings in the country.

The former Chief Imam had also faulted Buhari for failing to visit and console victims affected during the recent Abuja-Kaduna train attack, while also suggesting some measures the electorate should devise should the authorities fail to protect their lives.

sides this, he also said that “Nigerian masses should resort to only one term which is – protect our lives, we will come out to vote; let us be killed, we will not come out to vote, since it’s only elections that you people know.”

Reacting to this, Gumi had said that  “calling masses not to vote out incompetent government is worse than the few kidnappings.”

However, in his reaction to Gumi’s comment, Omokri described the cleric as a man who “wines and dines with terrorists” and also wondered why he would “sit in judgement over Khalid”.

“Sheikh Gumi is attacking Sheikh Khalid, who was suspended for criticising Buhari? Wonders upon wonders! A man who wines and dines with terrorists, and lied to them that the soldiers killing them are Christians, now seats in judgment over Khalid? Only in Nigeria!” 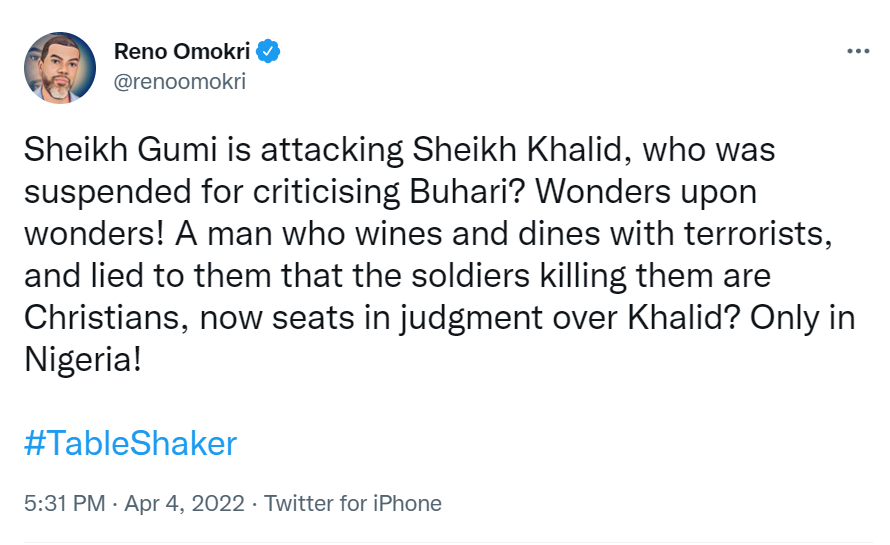