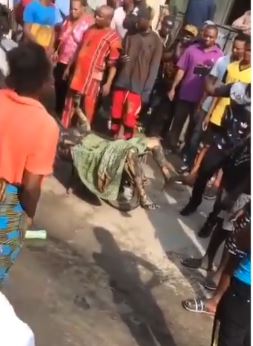 At least seven people were killed in a gun battle between hoodlums and soldiers in Ikire, Irewole Local Government, Osun State on Monday, October 26.

Trouble started when the hoodlums who had wanted to attack the palace of Akire of Ikire, Oba Olatunde Falabi, were repelled by the soldiers.

Having failed to gain entrance into the palace, the hoodlums started hurling stones at the soldiers and ambushed them after which they snatched their rifles.

Reports reaching us revealed that the hoodlums collected four guns from the soldiers and injured them in the process, after which they were taken to the hospital.

However, failure to return the rifles within the thirty minutes ultimatum given by the soldiers saw them calling for reinforcement, leading to serious shootings between the soldiers and the hoodlums.

An eyewitness reported that the gunbattle led to the death of many residents of the town including some family members of a prince who is purportedly causing chaos in the ancient town.

“When those hoodlums sacked the palace, six soldiers were sent from the nearby Ede barracks to placate the tensed situation and appeal to the miscreants. 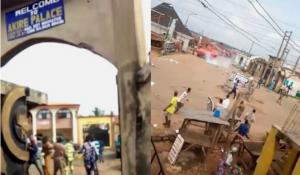 “On getting there, the hoodlums attacked the soldiers, stoned and beat them. Two of them managed to escape but luck ran out of the remaining.

“Their rifles were snatched, their uniforms were taken off and their vehicle was totally destroyed. One of them was later reportedly killed. I know we are in trouble as the soldiers would definitely remobilize and come back in full force,” the eyewitness reported.

EndSARS: We Will Ensure Government Fulfills Commitment To Protesters-Senate President