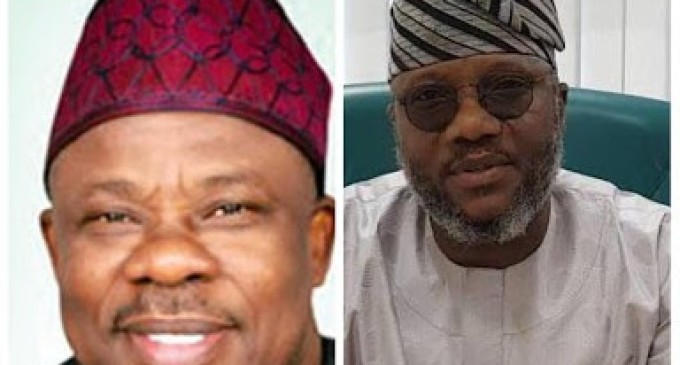 Adekunle Akinlade is an unusual man; he epitomises an oddity of sort. On his best day, he commands the passing tribute of a jeer, on his worst, he elicits contempt and vitriol as a human cesspit attracts ceaseless streams of spittle and nausea. But that is simply one way to look at Akinlade; it would be interesting to know what thoughts he arouses in the women in his life.

To his wife in London, Akinlade is the type of man that venerates a petticoat and g-string above native wisdom and tact required of a man of his ilk. According to an insider, he delights in juvenile lust to the detriment of even his most treasured relationships, that is why he experiences no scruples ditching any lover, no matter what value the woman has added to his life.

However, it has been a political earthquake of seismic proportion in Ogun State since Governor Ibikunle Amosun, in conjunction with few leaders of the All Progressives Congress (APC) in the state, unilaterally made a House of Representatives member, Adekunle Akinlade, his choice of his likely successor in office come 2019. While politicians are agitated about what is in his candidacy for them, majority of people whose thumbprints would be major determinant of Akinlade’s gubernatorial fate have been doing background check about the Ipokia Local Government-born politician.

While it has been established that Akinlade came to political limelight in 2011 when he was appointed the Senior Special Assistant on Taxation and Revenue where he functioned until 2014 before he decided to take a shot at the House of Representations, what has not been revealed is that Akinlade, in his younger days, lived in the UK, London precisely, lived life on a fast lane that almost put him in conflict some men of the underworld who almost snuck life out of him. In fact, findings revealed that he was once trailed from London to his Iyana-Ipaja area, Lagos home and two of his security aides lost their lives in his defence.

Akinlade has also been portrayed as a caring, doting husband of former beauty queen, Most Beautiful Girl in Nigeria (MBGN) in 2002, Chinenye Ochuba. Another fact about him hidden to the public is that he had earlier been married to another woman with whom he has his first child, a girl. He was said to have taken the advantage of the status of his first wife as a UK citizen to fast-track his documentation, and eventually his naturalization as a British citizen. The other side of Akinlade came to the fore when he dumped the woman at a point she needed care the most due to a health scare that challenged her to the core. Akin lade   dumped the woman and daughter like a bad habit.

There is no gainsaying the fact that the choice of a House of Representatives member, Adekunle Akinlade, as Amosun’s preferred successor, has received cheers and jeers in equal measures from members of the ruling party, the All Progressives Congress (APC) in Ogun State on the one hand, and the electorate on the other. While those who are against the Governor’s choice are branded rebellious; those for it have been tagged appendages of undemocratic imposition by the governor and few of the party leaders in Ogun State.

Although the governor has given a green-light to anyone with dissenting opinion to prepare for primary elections, it has been some awkward feeling of unease among candidates, even among those perceived as very close to the governor, and whose aspirations appear to have hit a brick-wall as a result of Governor Amosun’s choice.

It leaves many mouths agape why Amosun decided to settle for a man whose past was shrouded in questionable circumstances when Ogun State parades a line-up of sterling technocrats and politician with time-tested, brilliant records of public service. His choice has even left many wondering whether he has some skeletons in his cupboard that he needs a character like Akinlade to conceal.

The Shine Of Victor Adoji