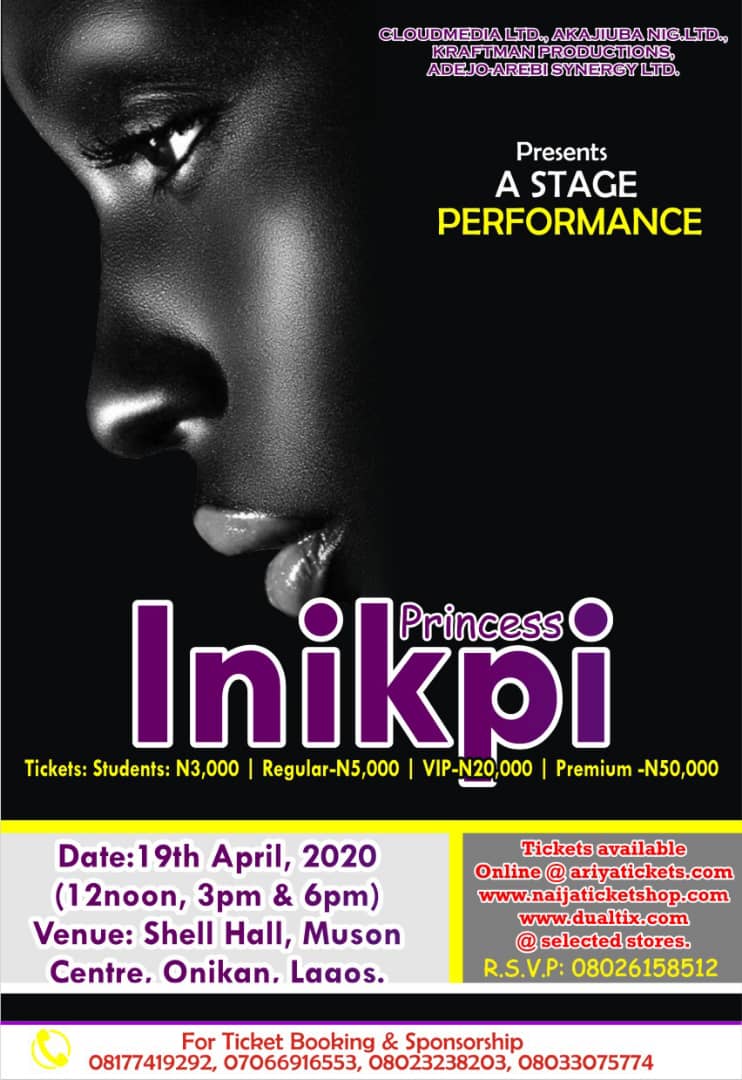 The stage drama “ Inikpi “ is a response to the persistent call by the government and particularly the armed forces to use the creative industries as a tool for social reorientation. Says the quartet of four production companies that pooled resources together to present the legendary story of INIKPI…the Igala princess who sacrificed her life to save her people .Like Gandhi said “ You must be the change you want to see in the world “.

Inikpi will bow with a command performance at the prestigious Shell Hall, MUSON Centre Lagos on April 19, 2020 followed by a national tour with performances at Abuja, Port Harcourt, Lagos and Kano. The setting of the novel and stage play is 17th century Igala Kingdom in present-day Kogi State, North Central Region of Nigeria. When goodwill was taken for a right, the kingdom decided to take a major stand on issue of rendering tributes in order not to undermine her sovereignty. Based on a true story and novel written by Okpanachi Joseph Adejoh, an Officer with the Nigeria Customs Service and a member of Association of Nigerian Authors. The plot and sequence of the stage play is all about dilemma; a dilemma that was far worse than being between the devil and deep blue sea. Ata Ayegba and his beloved daughter, INIKPI, were in the middle of this complex web.

I agree totally with Stella Adler who said that… “The theatre was created to tell people truth about life and the social situation “…In view of the insecurity in the country today no drama can be as relevant as INIKPI. For me, INIKPI is not just a traditional story; it has a contemporary relevance that cannot be ignored. For a contemporary society that has deficit of heroes, you must agree that INIKPI has a great relevance in inspiring our youths and the nation at large on the need for sacrifice, heroism and patriotism.

It is a highly motivational story that will inspire members of the security forces to greater valour. It will be a beacon of hope and inspiration for Nigeria’s teeming masses and is bound to stimulate new social ethos based on the need to rebuild the country with a message of hope, heroism, sacrifice and valour.

In the words of Okpanachi Joseph Adejoh Author of the book,

“As a custom officer, I appreciate the relevance of heroism and sacrifice .The general populace need to appreciate these facts and contribute their quota “

“Great theatre is, challenging how we think and encouraging us to fantasize about a world we aspire to”.

“I am worried that theatre has been criminally and consistently neglected by various government funding initiatives ranging from Project ACT, NEXIM to the current CBN / CIFI .Though am a Filmmaker I started from the theatre, so participating in this initiative is my own innovative way of saying we will help you and help ourselves by sensitizing the populace on the need for sacrifice and heroism “. Madu’s Kraftman Production is another leg of the quartet.

“It’s all about Corporate Social Responsibility …when you get a little, you also give a little back to the society “

First released in 2010, INIKPI is published by the West African Book Publishers and printed by Academy Press.

INIKPI is directed by Williams Ekpo who has over thirty productions to his cedit while Dr.Shaibu Hussein is the Cultural Consultant.

Related Topics:InikpiInikpi: Theatre Quartet Use Stage Play To Promote Heroism; Patroitism
Up Next