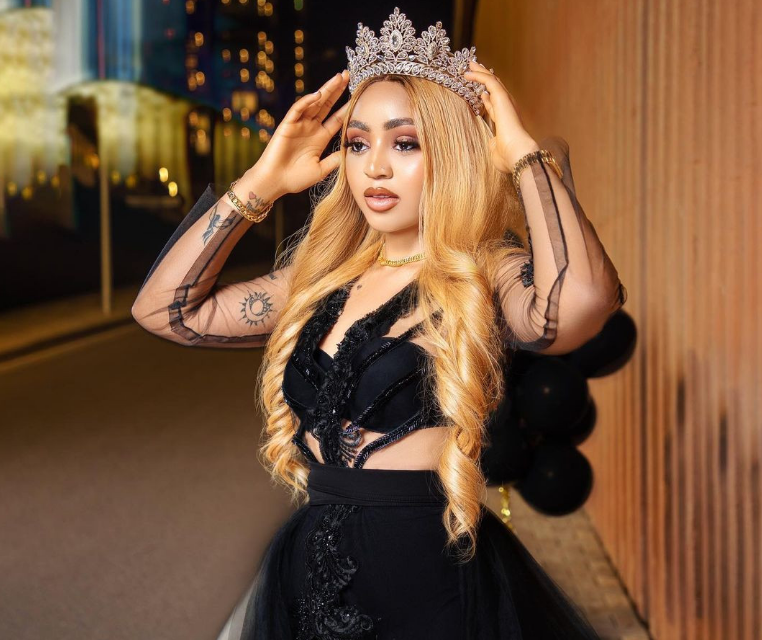 This comes after she mentioned the things she did for their family while she and Regina were still on good terms.
The women became sworn enemies after Regina took to her IG page to debunk claims she uses Kayamata products. She came out with the clarification after she was accused of using the product to make her former co-wife, Laila, divorce their husband, billionaire businessman Ned Nwoko.

Regina in her post stated that she has never used Kayamata and then went on to accuse Jaruma of trying to profit off her every time.

Jaruma in her response argued that she paid Regina N10 million to influence her brand and that she also lavished her family members with gifts and money. 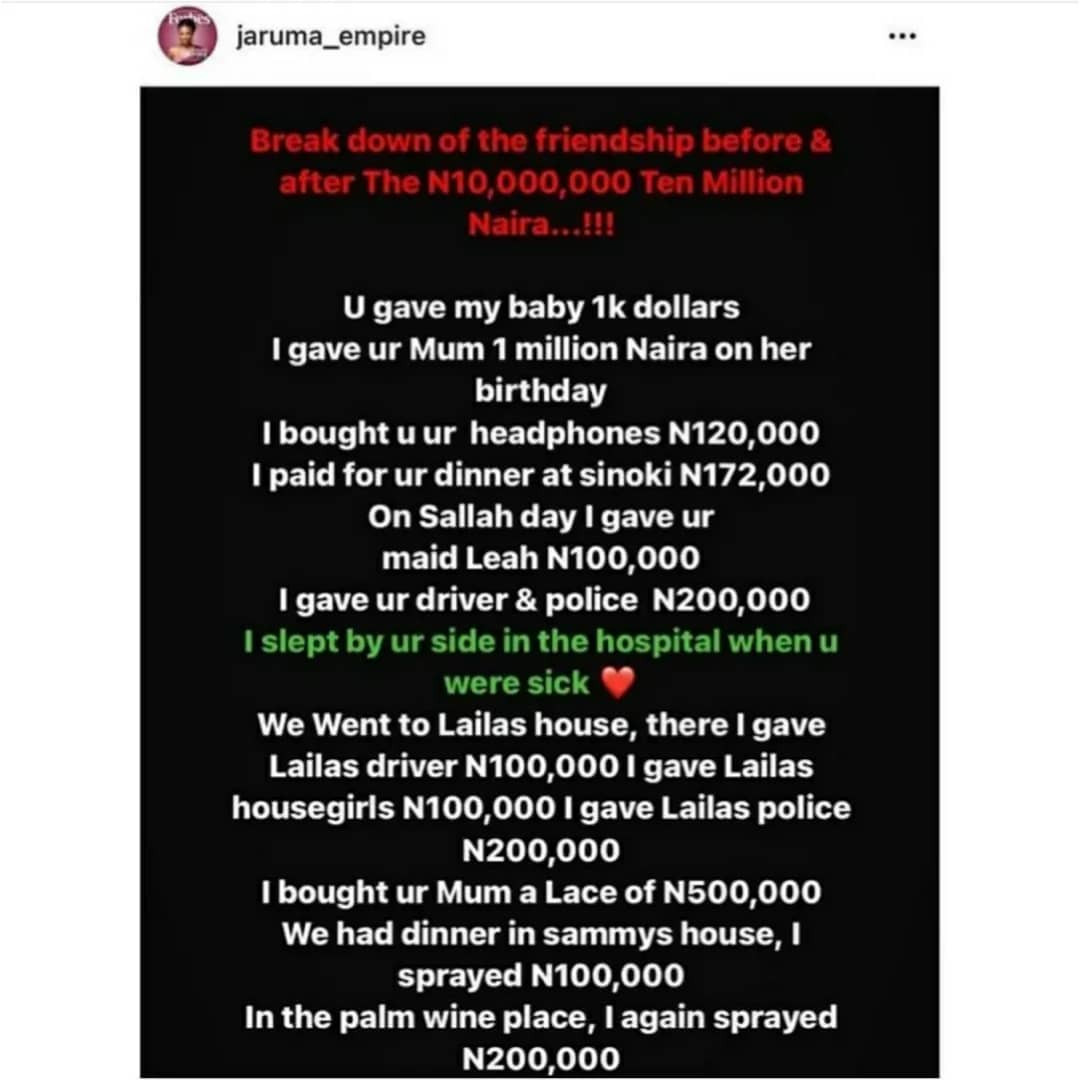 Reacting to Jaruma’s comments, the actress’s siblings including her sister Destiny stated that Jaruma heard about Ned Nwoko and Laila divource, and reached out to their mum to renew Regina’s contract but it was declined.

She went on to say:

”Ofc you paid her 10m naira for the deal madam. Nobody came to meet you to beg you for money, you singlehandedly shared money to those people and made records of it like you were doing it for humanitarian purposes but it was actually for the clout.

“The 1m you gave my mum was supposedly a birthday gift. The head phones too was an act of friendship bc she didn’t beg you for it, you wanted her to use it bc she had been using the one someone else got for her and you were jealous but let’s not go there.

“I always knew from the onset that you were always after clout. when you got Gina’s cosmetics, you made videos more than 10times to get the perfect shot and she didn’t still beg you to do that, you later collected the money and said you were gon transfer that you like holding money in your hand.

“You still called my mum last night to renew the contract bc you had seen the ongoing issue as an opportunity for your business and she didn’t agree, that’s why you decided to do this.

“Clout chasing is only throwing your name in the gutter but since it’s what you do to earn a living, I wish you more successful clout chase aunty jaruma. Thank God you’ve sha not given me anything and I’ve not taken anything from you neither so it’s good that you didn’t add my name bc I’d have definitely said more than this that you wouldn’t want the public to know about. Thanks and God bless
@jaruma_empire”Destiny wrote

On his part, Sammy stated that Jaruma’s kindness was staged.

”Sister @jaruma_empire you know I gat love for you normally, but you just burst my head  you were literally taking note of every kind act you rendered willingly.

“Ps; it was appreciated, and the day we had dinner at my place was a Happy family day, and I know you enjoyed it  but c’mon you fall my hand oh! That means your kindness was staged? Swipe for more fun time. When we go do Re-union my sister? @jaruma_empire” 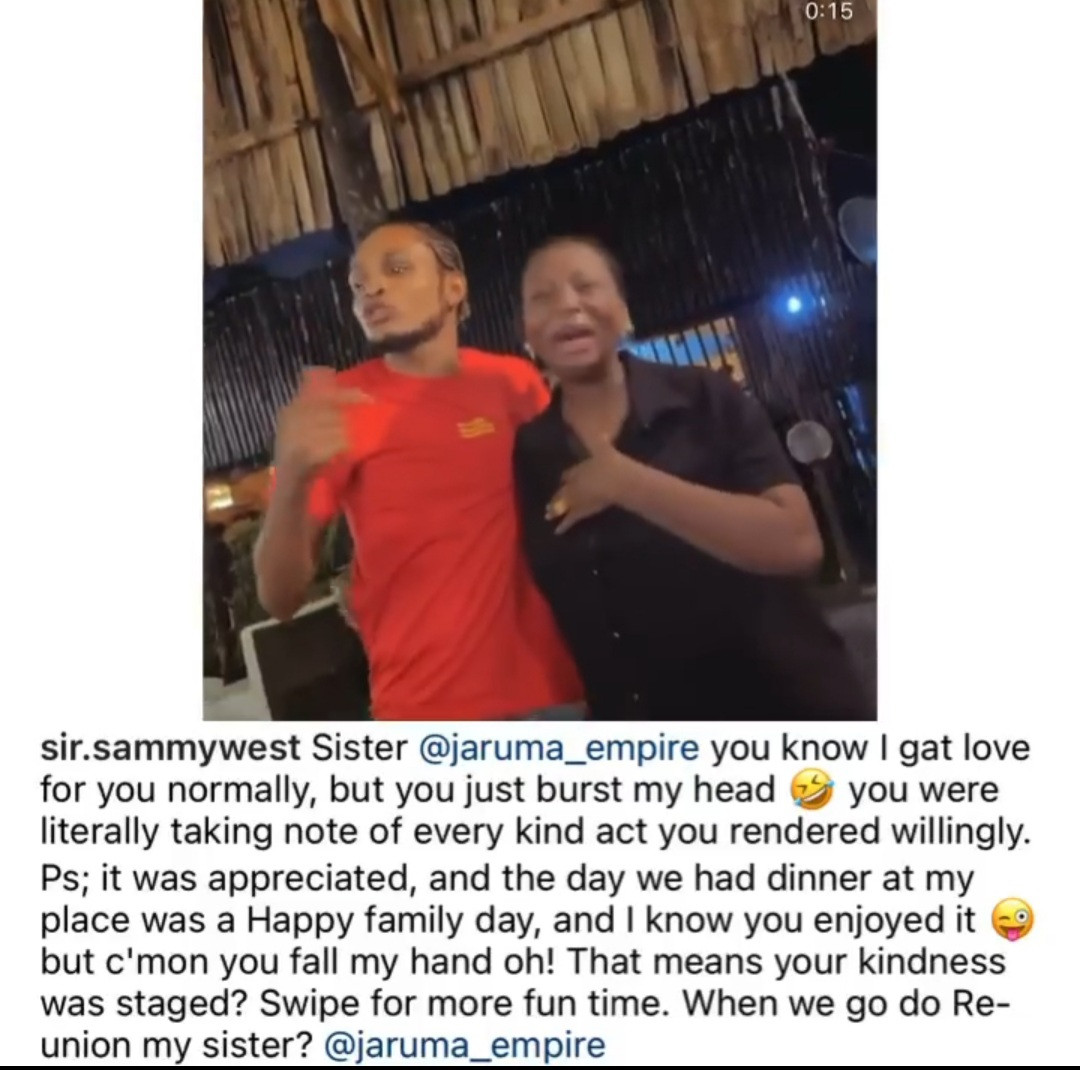 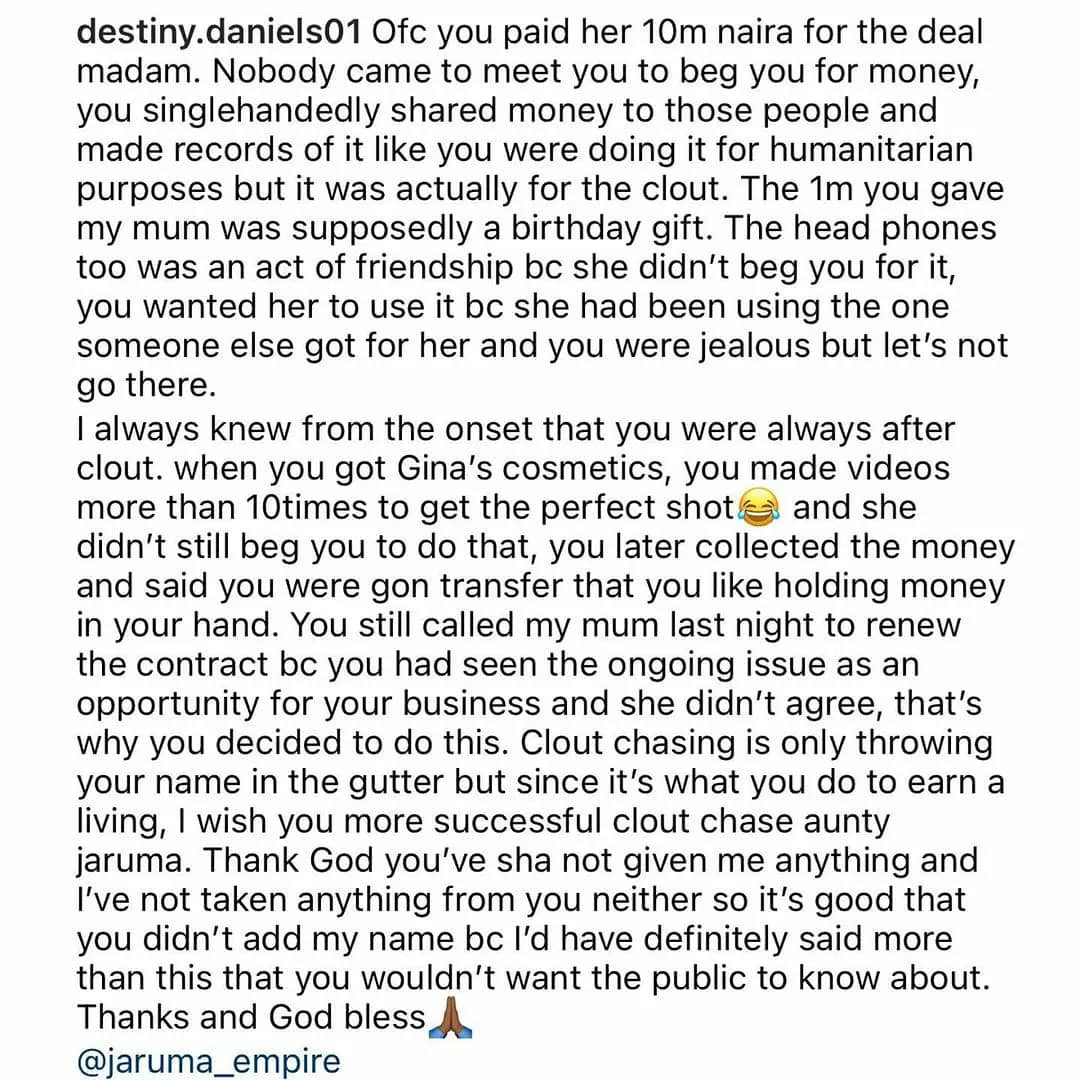 I Was In Spiritual Bondage For 30 Years, Reality Star, Chris Adah Says