The premiere of Alagbara Series will remain indelible in the annals of history in the production of Yoruba Television series for the people of the South West, Nigeria and other Yoruba speakers across Africa where StarTimes digital pay TV beams. The star-studded series brought together a-list Yoruba actors; Producers; marketers; Integrated Marketing Communications professionals and other social Nigerians to its unveiling.

The TV series which is the concept of a Yoruba movie veteran, Adebayo Salami popularly called Oga Bello was produced in partnership with StarTimes Nigeria to achieve the feat with other seasoned actors such as Adebayo Salami; Femi Adebayo-Salami; Dele Odule; Bukola Awoyemi-Olatunji; Ronke Oshodi-Oke; Toyin Adegbola; Lanre Hassan; Funso Adeolu and many others.

The ambience of the event was truly traditionally Yoruba, in fact, the representatives of StarTimes were cladded in Yoruba attires and the Yoruba movie industry professionals were in their flowing agbadas. From the ushers to the registration point, to the bouncers and the guests, everyone proudly represented the Yoruba race.

For the cocktail, there was a customized palace where every guest had the opportunity to be a King with the horsetail and a Royal walking stick. Thereafter, everyone proceeded to the main auditorium where Seyi Law was at hand to crack the ribs of the audience. Each of the tables were decorated with the lantern and a sekereloosely translated as a bearded gourd.

Adebayo Salami, the lead partner mentioned that the struggle started in 2016 when some Chinese movies were dubbed in Yoruba language but after due consultation with the StarTimes team, they promises to promote Yoruba culture and this has eventually materialized with the production of this series. His role in the series is that of a successful butcher whose slang is “the people is my body” and we need to watch out for this slang on the street from now. 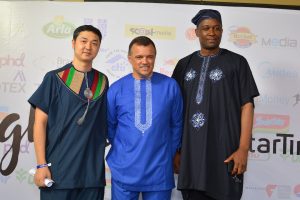 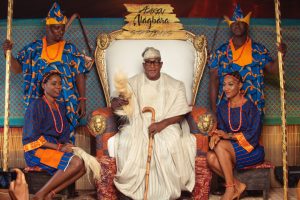 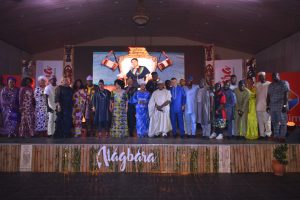 The CEO of StarTimes Nigeria, Justin Zhang, made it known that Nigerians should be ready for more great productions with other veteran actors in the country. He noted another season of Alagbara has also been shot and the brand will do all within her reach to continually support the Nigerian movie industry through various laudable initiatives.

Other highlights of the event include the electrifying performances by the artiste that produced the soundtrack for Alagbara and a bata drum orchestra called Karkarkey Percussion led by Oladeji Oreofe. The audience had an opportunity to preview an episode of the series. If I were you, I will rush to Orisun TV, Channel 153 on StarTimes to watch the episodes weekly.

AFRIFF ends on a high with the globe award